Common Shelduck (Tadorna tadorna) are adorned with highly contrasting plumage. While most have neutral colors, they are all bright and pure colors with the addition of the bright red bills and fleshy growths that are most prominent on the males. Common Shelduck males have jet black plumage that can also appear iridescent green on their heads and down their necks. White plumage is found on the chest, underbelly, back, and tail of this species. There is a large black patch of plumage on their wings, which are in the shape of a horizontal teardrop on either side of their bodies. Patches of rusty or copper are shown on the anterior and posterior of the black teardrop on the wings.  Common Shelduck females have similar plumage  and bill colors that are slightly duller. Females are smaller and also lack the fleshy red growth above the bill, and display a more pinkish bill. Juveniles and females have similar dull plumage. In comparison to geese, Common Shelducks are smaller and have shorter necks.

Common Shelduck is commonly found in or near lakes and rivers in open country. They have been documented to breed and nest in rabbit burrows, tree holes, haystacks, or similar areas. Common Shelducks typically leave their chicks when they are preparing to molt under the care of a few pairs to look after them, which at the minimum will be one or two adults.  Molting populations have been documented to be as large has 100,000 in the Wadden Sea. While this species is native to the Euro-Asian continent, there have been rare sightings of them in the United States of America and Canada. 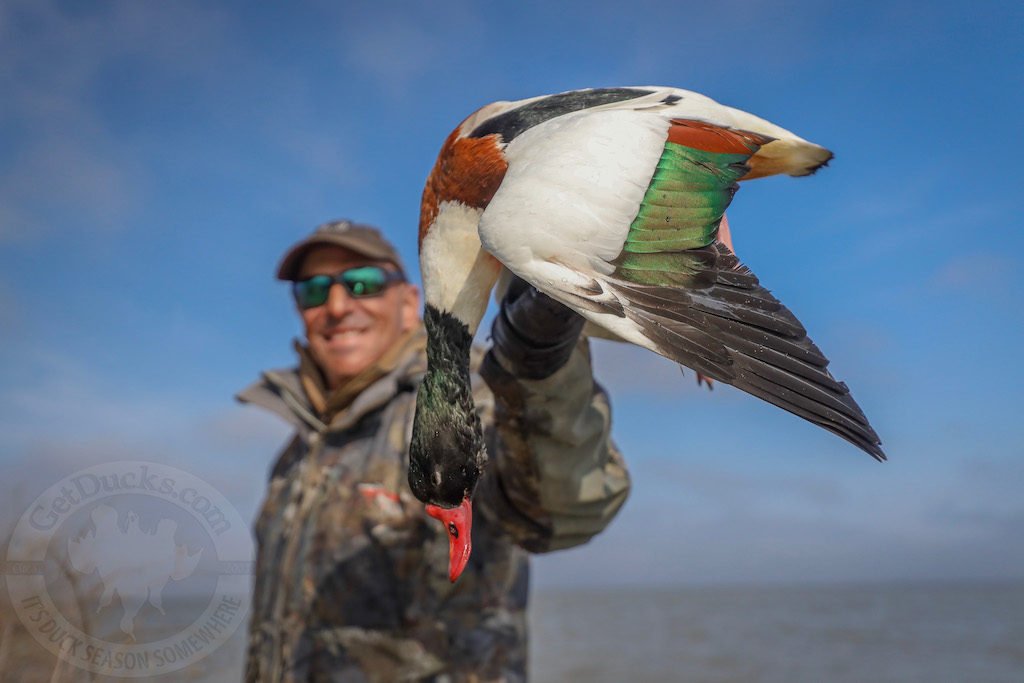 Common Shelduck species is omnivorous, the majority of their diet revolves around animal matter which involves winkles, crabs, and other aquatic invertebrates; with a supplementation of grasses and other emergent vegetation available.

COMMON SHELDUCK HUNTS. There’d been nothing but pintails using the shallow flat for the 2 preceding mornings. A cold front hit, heavy fog turned the surrounding landscape eerily monochromatic. The wind kicked up to about 25 miles per hour, pushing the inches deep water across the waterbody. Mere mud slick for 20 yards forward of the skimpy blind, decoys laying on their keels. Three common shelducks worked the mud about 150 yards away and I remembered watching them feed in similar habitat in Mongolia several years ago. Shelducks are Eurasian species, huntable in Mongolia and Azerbaijan, but protected in EU countries such as the Netherlands. The distal end of their bills are slightly upturned. They sweep it through the mud for invertebrates, like a mason sweeping a trowel. There, having no way to hunt the feeding area, we’d determined their flight patterns, intercepted them. Decided to patiently stick it out. Saw 60 birds throughout the morning, nothing but common shelducks. Like someone flipped a switch, at about 10AM the wind stopped, the fog lifted, the water came back, and the intermittent flight completely ceased. But that was ok. 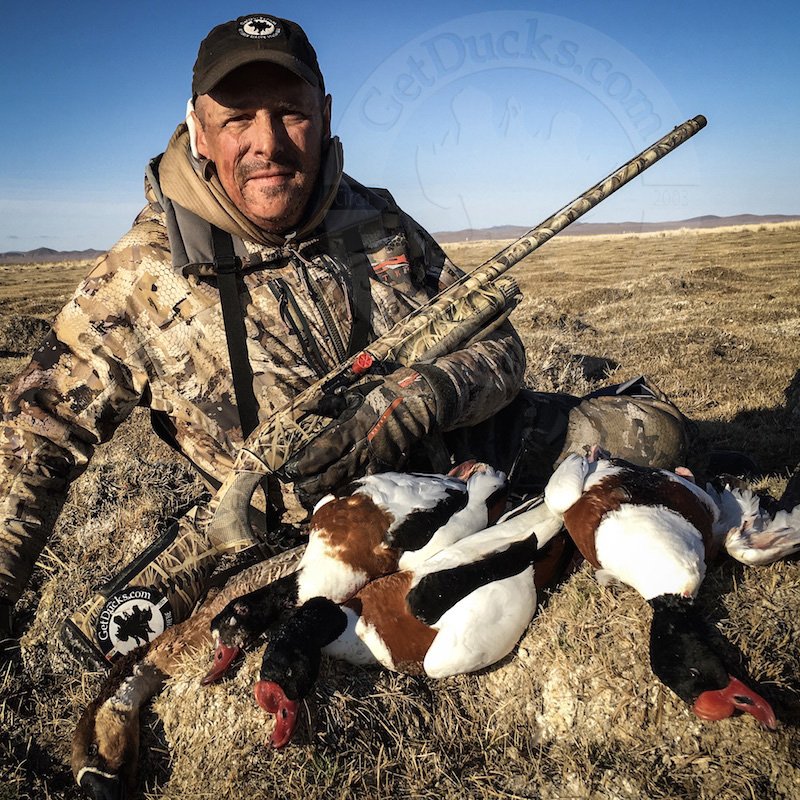