"La Paz Argentina duck hunting combo was a great one..."

Ramsey Russell, founder of GetDucks.com, discusses a wide range of topics related to international duck hunting and shares insights gleaned from a  2 decades-long journey in world-wide duck hunting that has taken his company to any unprecedented level.

Jeff and Andy are joined by waterfowl legend, Ramsey Russell. Ramsey has traveled the world chasing ducks and geese in every corner of the planet. The guys talk about some of Ramsey’s many travels, including a wild adventure with some gypsies in Romania. Ramsey has a new podcast “Duck Season Somewhere” that can be found on Apple Podcast or where ever you listen to your podcasts.

Hunters United – Ramsey Russell from GetDucks.com joins a discussion on waterfowling around the world and the shared frustration of being stuck at home because of a global pandemic. Ever positive, Ramsey is looking forward to his next “duck day” and backing Field & Game Australia‘s push to unite hunting organisations. Ramsey has also recently launched his own podcast Duck Season Somewhere podcast. The latest fireside chat is with our own Glenn Falla about duck hunting in Australia.

Why Does March 1 Feel Like it was Twenty Years Ago? 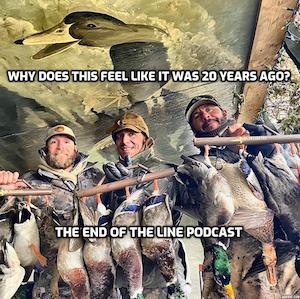 I don’t think it could have been have been put any better from either Ira McCauley or Ramsey Russell in our preproduction meeting than March 1 seems like it was 20 years ago. It feels like we are living in the Kenny Rogers song “Twenty Years Ago”. I have to admit it has always been one of my favorites by the late legend. This historical and legendary event that is unfolding before our eyes is something one day we will be sitting in our rocking chair telling our grands or great grands about. There hasn’t been a podcast for a while and I understand the frustration, but with what is coming you will thank me. I go over what exactly you can expect in the future at the end of the podcast. But first, what does a world traveling waterfowl hunter do when he has been totally shut down? Hear how Ira barely escapes a Mexican vacation when the US shuts down international flights into the US while he is on vacation. Then, I ask questions and they give their thoughts on the current situation and what they expect from the future. Great returning episode!

Eli and Trey have on the worlds foremost duck hunter, Mr. Ramsey Russell founder of GetDucks.com. Ramsey hunts ducks on 6 continents and is known as the Jim Shockey of duck hunting world. Join the guys as they talk with Ramsey about all things duck hunting. Ramsey talk about how he got started and how COVID-19 will impact his business. Also he tells some great duck hunting stories from around the world. https://www.instagram.com/ramseyrussellgetducks/

On today’s episode, Elliott and I are joined by Ramsey Russell, GetDucks.com. We discuss everything from his Duck Hunting Travels and much, much more! 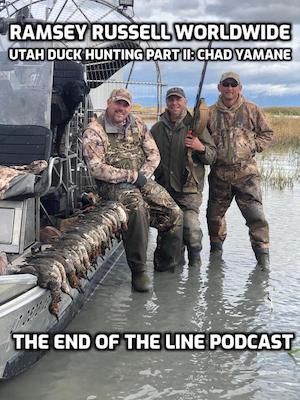 Following another fast-paced green-winged teal hunt, Ramsey is joined by Chad Yamane, Fried Feather Outfitters to discuss Utah waterfowling opportunities. Chad is a duck hunting guide in Utah that specializes in swan hunts. They discuss the ins and outs of Utah duck hunting, how different species key in on certain habitats and how they transition as winter progresses. Part 2 of a 5-episode Ramsey Russell Worldwide Utah series, Chad provides another facet of Utah’s uniquely diverse duck hunting. 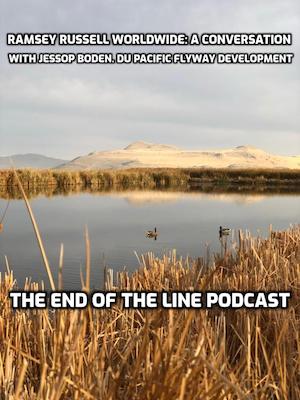 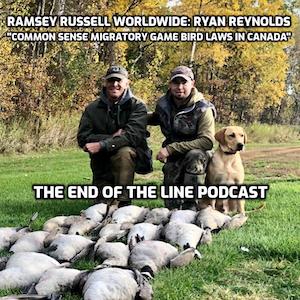 Ramsey Russell meets with Ryan Reynolds of Ryan’s Outdoor Services, Ontario Canada Goose Hunting. Ramsey and son, Forrest, took a long weekend to hunt Canada geese in the famous Ottawa Valley. After the hunt, Ramsey shared a cup of coffee with Ryan, a Canadian waterfowl expert and Wildlife Habitat Canada board member. Canada is modernizing migratory gamebird regulations. The guys talk about some of the common sense proposed changes that are taking place. It makes for an interesting Ramsey Russell Worldwide episode, to say the least. Here’s hoping it soon happens in the US, too. 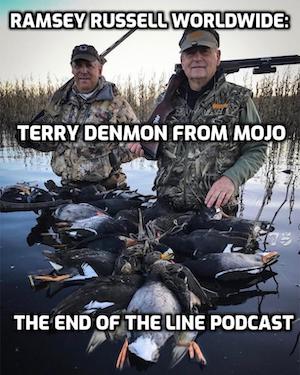 Ramsey Russell is joined by Terry Denmon from MOJO Outdoors, the most recognizable brand name in waterfowling. They talk about the story of MOJO. What was it like in the early days when spinning wing decoys were hotter than crack, were selling in the back alley and you could get more money for one? Where is MOJO headed? And do they even get around to talking about the story of Spoonzilla, the most interesting decoy in the world? We learn a lot about the man behind the curtain, his thoughts on the future of hunting and conservation. Awesome episode from Ramsey Russell Worldwide! 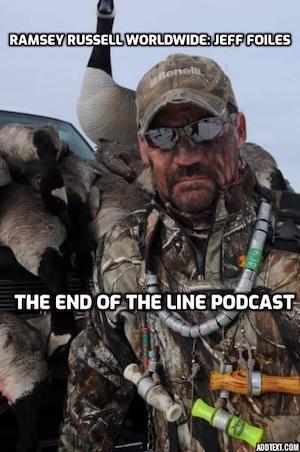 After a great fried catfish dinner, Ramsey Russell and Jeff Foiles visit across the table at Foile’s Rok Outdoorz shop. Jeff had just returned from organizing the First Annual Tim Grounds Memorial Duck and Goose Contest. What feedback Jeff has received since telling his story on the End of The Line podcast? The guys frankly wonder about federal migratory bird statutes. Where does Jeff go from now that his side of the story is out there? The guys also have a short discussion about why the waterfowl ammo game is suddenly changing in an exciting way. Another great Ramsey Russell Worldwide episode you don’t want to miss.