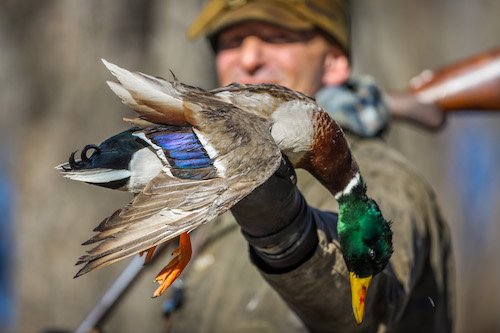 The Mallard (Anas platyrhynchos) is the most iconic wild duck found in North America and, truthfully, throughout nearly the entire northern hemisphere. A large puddle duck, their luminous mallard-green heads are definitive. “Greenhead” even colloquially refers to either drakes, or drakes and hens both! Drakes also have the recognizable white collar directly under their green head and display the classic black-tail curl. Mallards have gray-brown wings with bright blue speculums, double white wing bars, with the top white wing bar extending into hen’s tertials.  Non-breeding males have similar plumage to the females, but still have the bright yellow bill that breeding males display, while hens have an orange bill that increasingly mottle in adulthood. Hen vocalizations are the quacking gold standard of the duck hunting world. drakes make a quiet rasping buzz. 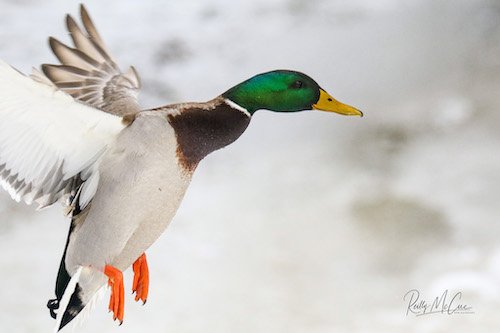 Mallards are ubiquitous throughout the United States year-round. Migratory breeding zones in Alaska, Canada, some northern states, and even Eurasia. They are not picky eaters, and will consume available plant and animal matter in the water or on land. Diet while migrating is dominated by agricultural seeds/grain. During the wintering season, mallards can be found in the southern half of the U.S. and into Mexico. Habitat requirements for this species may be filled by any area that is remotely wet, whether it be permanent or ephemeral wetlands. They may also be found in suburban areas.

The Mallard is responsible for most domestic duck breeds, except for the Muscovy duck, and has proven to be valuable in the wild and in domesticity. Wild North American mallard research has demonstrated “Old World” genetics in the Atlantic Flyway versus “New World” genetics in Central and Pacific Flyways, and may account for population and perceived migration trends. (Listen Now: Just a Mallard? Think Again).

Mallards are an extremely popular bird to hunt, making up 1 of every 3 birds shot in North America. There is nothing more American in duck hunting than the ever-popular mallard.