Picazuro Pigeon (Patagioenas picazuro) is a simple yet beautiful common species of bird found in central and southern South America. The plumage on their head is a red-tinted gray with no dappling. Picazuro Pigeon irises are bright orange, yet that is not the part of the body that stands out the most. The plumage around their necks is the same color as the head that is tipped with pale iridescent colors that begin with blue and gradually turn to orange. The rest of the body plumage is simple, with sooty gray breast and underbelly. The wings are the same and are tipped with white or lighter gray around the edges. Tails are the darkest part of the body and are very dark gray, but not quite black. Their call is described as monotonous and deep in pitch, and is likened to wuu-pupuh wuu-pupuh.

The Picazuro Pigeon’s estimated range extends from Argentina, Bolivia, Brazil, Paraguay, to Uruguay. They are adapted to a variety of habitats that includes woodlands and agricultural lands. While there have been no direct studies to determine actual population size, it is hypothesized that there is a large population that is increasing, as they are fairly common birds.
While the behavior of this species has not been extensively studied, similar species have been used to infer some more specific behaviors, though common behaviors are well-known.

Picazuro Pigeon foraging behavior takes place on the ground where they consume seeds and grain. The breeding season does not end and pairs are known to nest year-round. Individuals do not migrate which allows them more time to breed. Nests are flimsy and precarious, a famous characteristic for most pigeon and dove species. Only one egg is laid per clutch, and both parents take part in incubation, rearing, and protection of their young.

Picazuro Pigeon hunting in Argentina is great sport. I think of it as duck hunting but with hiking boots. Hunters must be expertly concealed, far more greatly than when duck hunting. Stationary and motion decoys are deployed. Felled pigeons act as additional decoys, eliciting additional birds to swoop in more readily. Where pigeon hunting remains consistently good, limits are strictly abided and birds are hunted sparingly. Pigeons do not take hunting pressure. They’re not as productive as doves, and they do not tolerate extended disturbances. Oftentimes, many Argentina outfitters deplete local pigeon populations within their areas by over hunting. 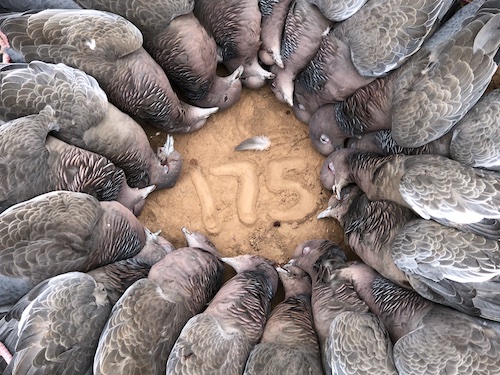