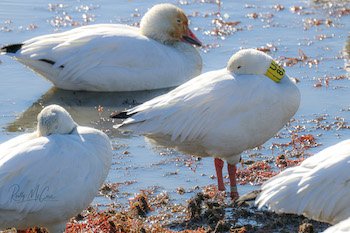 The Greater Snow Goose (Chen caerulescens atlanticus) breeding areas are limited to western Greenland and the surrounding islands, such as Baffin Island, making them among the northernmost breeding geese in the world. They are 25-30% again larger that Lesser Snow Geese, with notable larger heads and much heavier bills. Their upper primaries differ from lesser snows because they are much lighter gray, this is most readily seen in flight. Their growing population is normally all white-phase and seeing a blue-phase is extremely rare. Greater Snow Geese primarily overwinter within the mid-Atlantic Flyway seaboard. Virginia, Maryland, Delaware, New York, New Jersey, Massachusetts, and Delaware have good numbers at times and the hunting can be excellent. 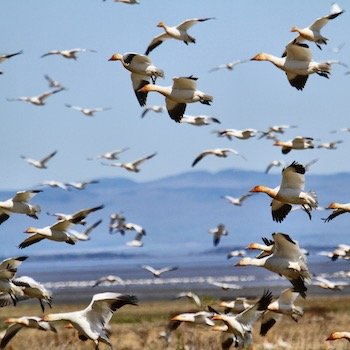 Like threading a needle, practically the entire Greater Snow Goose population migrates through the St. Lawrence River Valley in Quebec, Canada, where Greater snow geese are historically a favored staple of French-Canadians. After Samuel de Champlain founded the City of Quebec, which literally translates as “where the river narrows” and is among the oldest European settlements in North America, a second settlement, St. Joachim, was soon established just to the north to provide Quebec City’s growing population with food. The area was rich in game, particularly in geese, which became synonymous with Quebec’s long-standing hunting traditions. By the early 1900s, the greater snow goose population had become depleted, dwindling to as few as 3,000 geese. Protective measures included creating the Cap Tourmente National Wildlife Refuge and enforcing hunting regulations. The population has since rebounded to about 1 million greater snows.

In the St. Lawrence River Valley, Greater Snow Geese feed primarily on rhizomes along the muddy riverbank where they can be seen stretching for miles at low tide. During high tide, which can surge as much as 20 feet, geese are driven from the riverbed into adjacent fields. They are most active at peak high tide. As the tide recedes they resume grubbing up to their necks in the iron-rich mud that casts a roux-colored stain on their plumage.