Spot-winged Pigeon (Patagioenas maculosa) is a large game bird that is distinguished by its namesake, the unique brown and white dappling on the wings. This plumage obviously contrasts with the bird’s overall blue-gray body. The forehead, back of the neck, and the upper chest can sometimes be seen as more of a pinkish hue.

The Spot-winged Pigeon has clear blue eyes that do not particularly stand out. Like other species of doves and pigeons, this species displays pinkish legs and feet. While in flight, the plumage surrounding the dappled section is white and crescent-shaped, which is then followed by dark primary feathers. Also best seen in flight are the tail feathers, which are blue-gray and are tipped with dark gray or black. Females and juveniles have duller plumage than the males. This species can be likened to the Picazuro Pigeon in their overlapping range. Spot-winged Pigeons lack the yellow eyes, overall pinkish hue, and brightly colored legs and feet that the Picazuro Pigeon displays. 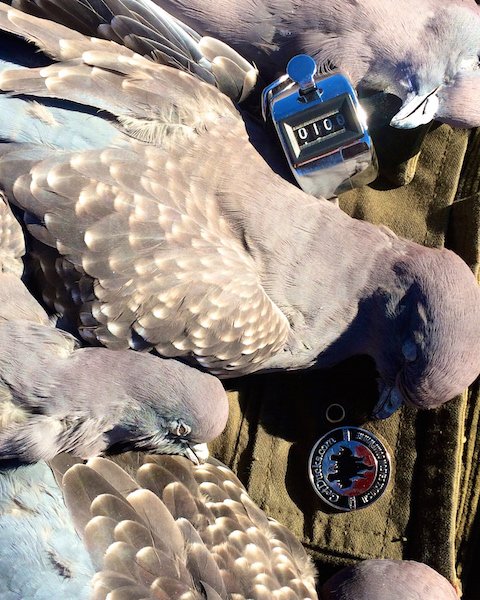 Spot-winged Pigeon is fairly common and are found in Argentina, Bolivia, Brazil, Chile, Paraguay, Peru, and Uruguay. They inhabit multiple natural and human-disturbed areas, including, but not limited to, subtropical or tropical dry forests, scrubby Andean slopes, seasonally wet of flooded lowland grasslands, town parks, and agricultural areas. They are mainly herbivores and have a high affinity for seeds, fruits, young leaves, grains, and grasses. For this reason, in Argentina, this species is considered a pest to sunflower crops.

The breeding season can last year-round for most of the population. It only appears to end for the only population that actively migrates, which is found in Brazil. During wintering periods for this population, it is common to see individuals form large flocks. The rest of the population tends to stay in small flocks, in pairs, or individually. Nesting behavior for all populations consists of flimsy platforms created in Eucalyptus trees and thicket near human establishments. Each brood consists of two white eggs, and both parents feed the young until they leave for their first flight.

SPOT-WINGED PIGEON HUNTING in Argentina is great sport. I think of it as duck hunting but with hiking boots. Hunters must be expertly concealed, far more greatly than when duck hunting. Stationary and motion decoys are deployed. Felled pigeons act as additional decoys, eliciting additional birds to swoop in more readily. Where pigeon hunting remains consistently good, limits are strictly abided and birds are hunted sparingly. Pigeons do not take hunting pressure. They’re not as productive as doves, and they do not tolerate extended disturbances. Oftentimes, many Argentina outfitters deplete local pigeon populations within their areas by over hunting.