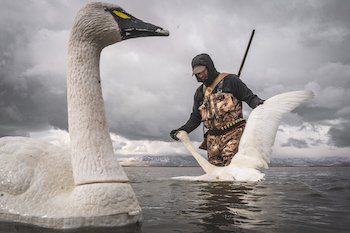 Tundra Swan (Cygnus columbianus) is the most abundant North American swan species and can be hunted with either lottery-draw or over-the-counter tags in 10 US states.  Both sexes of this large species of bird can be identified by their completely white plumage, elongated neck, black bill, and usually displaying yellow on their lores (which is found in front of the eyes and behind the bill). Tundra and the mostly protected Trumpeter Swan have similar features. Tundra Swans are slightly smaller, display the yellow lores, have relatively more melodious trisyllabic vocalizations, and in hand have smaller bill measurements. Black legs and feet contrast with their bright white plumage, and are commonly used digging up tubers. Tundra Swans mostly forage through dabbling in the water for plant and animal matter. Their mostly vegetarian diet consists of sedges, pondweed, corn, soybeans, arthropods, and mollusks. Sago pondweed is favored. 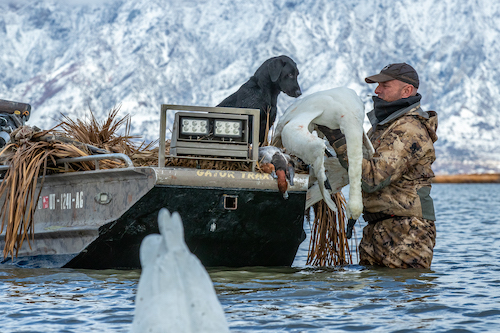 Sometimes referred to as “Whistling Swan,” Tundra swans do not actually produce whistling sounds. Their call is high-pitched, with first-year swans having the highest-pitched, and have been described similarly Snow Geese. This species produces more of a “warbling” or “wavering” sound, trisyllabic yelps sounding like whoo-whoo, whoo.

Tundra Swans will choose arctic and subarctic lowlands whenever possible during the year, breeding only within Alaska, along the northern coast of Canada, and Greenland, and preferring to nest on elevated land near a water source, such as a ridge. Both pair members will create the nest and protect their territory from members within their own species and other waterfowl. Wintering grounds are scattered throughout the continental United States , with most seeming to gravitate towards Pacific and Atlantic flyways. The Atlantic Coast overwinters good swan numbers.