Updated September 2017 – For Alaska residents, Emperor goose hunting is legal for the first time in 3 decades. It is possible that Alaska non-residents will be permitted to draw for 2018 hunting opportunities.   Read more here.

August 2015 – The 2015 survey puts Emperor Geese within the 3-year running average index.  The politics of subsistence versus sport hunting are being sorted and we are eagerly awaiting news of future hunting opportunities.

October 2012 – The Emperor Goose is a marine waterfowl species, raising young in coastal, tidally-influenced habitats, feeding on sedges and grasses, and spending their entire non-breeding periods in intertidal habitats.  Throughout their annual life cycle, Emperor geese occur in remote habitats that have incurred relatively little modification by direct human activities.  Cold Bay Alaska and nearby Izembek Lagoon are ideal for viewing this magnificent species while hunting other waterfowl species common to the area. 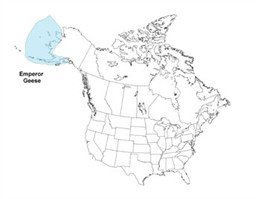 Eighty to 90 percent of the world’s emperor geese breed along the western coast of Alaska, from Kuskokwim Bay to Kotzebue Sound, and on St. Lawrence and Nunivak islands.  Most Emperor geese winter along the Aleutian Islands, along the south coast of the Alaska Peninsula and Kodiak and Afognak islands.  In mild years, some birds winter along the coast of the Gulf of Alaska and Cook Inlet.  Increasingly, Emperor Geese have been observed overwintering in Cold Bay and Izembek Lagoon. Small numbers occur in British Columbia, Washington, Oregon and occasionally northern California.

The Emperor Goose species has long been harvested by Native subsistence hunters.  However, the Emperor goose is one of just 3 waterfowl species currently unavailable for legal harvest in Alaska, as governed by the Alaska Migratory Bird Co-Management Council.  Survey results show that Alaska’s Emperor Goose population declined steeply from about 139,000 birds in 1964 to 42,000 in 1986; has remained low and below management goals since then, albeit with a small amount of recent increase.

Breeding success remained constant during the decline, suggesting that increased mortality may be a primary factor in the population decrease.  In 1985 the Emperor Goose limit was reduced sharply from 6 to 2 birds.  Managers closed the Emperor Goose hunting season in 1986.  Subsistence hunting was closed in 1987, although there continues to be some take. The goal is to restore the emperor goose population to historical levels.

Fall age-ratio surveys have indicated low production over the last decade, and possible causes for this include changes in abundance of preferred sedges, predation by Arctic foxes and gulls, and competition from increasing numbers of other geese.  It has been suggested that because Emperor geese do not exploit agricultural food sources, as do the Taverner’s Canada geese and Cackling 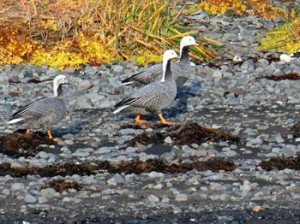 geese with whom they share a breeding range, that their reproductive productivity is comparably less. The continued harvest of Emperor geese appears to affect recruitment of adult Emperor geese.

Already there is talk – mostly optimism and crossed fingers among avid waterfowlers and US waterfowl collectors – that Emperor Goose hunting season will be reinstated in the not too distant future.   The opportunity to harvest just one or 2 of these beautiful species will be a dream come true for most goose hunters, and for the Emperor Goose hunting season to again be reinstated will be yet another milestone in successful wildlife conservation.