The African Knob-billed Duck (Sarkidiornis melanotos) has an unmistakable namesake. Indigenous species to Africa, its black bill is adorned with a massive, pancake-shaped knob. Not only is this species easily identified by its bill, they are also one of the largest species of duck. The plumage is also nothing short of beautiful with the back, wings, and tail being completely iridescent blue and green when at rest. The chest is normally stark white, and the underbelly is either matching white or smoky grey. The white head plumage is also distinctive because it is finely speckled with black flecks that match the bill color. African Knob-billed Duck females lack the distinctive knob on the bill, are generally duller in color, and are a lot smaller in size. Juveniles are rarely without adults so their buff face and neck and duller plumage is also easily identifiable.

African Knob-billed Duck does not typically migrate, but will leave well-known areas in search of appropriate water sources. Interestingly, females and males are known to separate into different flocks when traveling longer distances. The African Knob-billed Duck breeds in freshwater swamps and lakes in tropical areas. Their large range extends from Sub-Saharan Africa, Madagascar, northern India to Laos, and into southern China. This species is not monogamous, as males normally have two mates at once, but have been known to have up to five different mates throughout the breeding season. Nesting typically occurs in tree holes and tall grasses. Males are only territorial when it comes to protecting their mates and young.

The African Knob-billed Duck is by definition an omnivore despite the majority of their diet revolving around plant matter. Foraging is normally done by dabbling. This affinity for plant matter has become an issue in some areas that are farmed for rice. Their diet is supplemented by small fish and aquatic and terrestrial invertebrates. 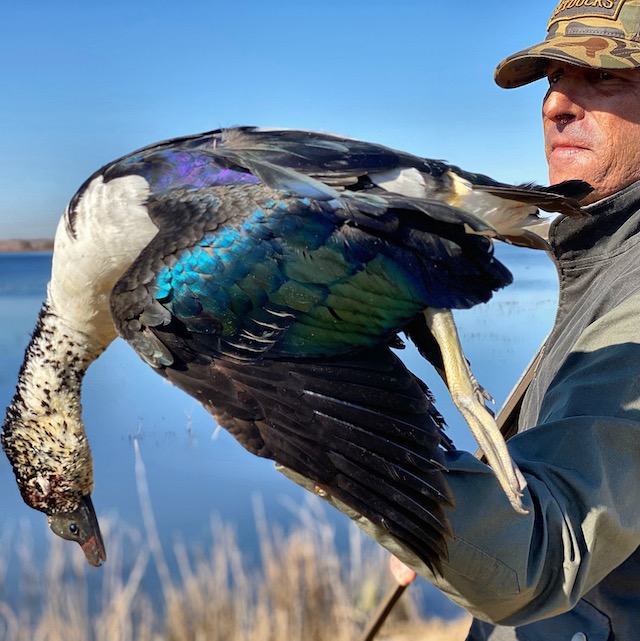 AFRICAN KNOB-BILLED DUCK. One of the largest duck species, their black and white coloration resembles muscovy ducks at a glance. Breeding drakes have a prominent “comb” (getting even larger than the ones in these photos). They’re associated with emergent marsh wetlands mostly. Likewise there are usually black-bellied whistlers, spur-winged geese and hottentot teal nearby sometimes white-backed ducks. Possibly pygmy geese if water lotus is present. Drakes considerably larger than the hens, which lack the comb. White underside, neck and head peppered with black flecks (couldn’t tell if yellow highlights on feet and neck were pigmentation or mineral deposit discoloration). Black topside shimmers hues of metallic blues and greens, like burnt motor oil. There are 2 subspecies worldwide. The primary distinction, African knob-bills have gray flanks, South American knob-bills have dark flanks. As an aside, where we’ve killed them in Argentina they refer to them as “rain ducks,” and sure enough it’s rained after seeing them. I think their breeding cycle is later. The half-dozen we shot still had pin feathers throughout, wish could follow them through binoculars a little longer to see how their plumage and combs progress. The ones we’ve shot over the seasons presented themselves as passing goose shots or fly-overs. Certainly one of the most unique South African species that requires getting a little further off the between path. 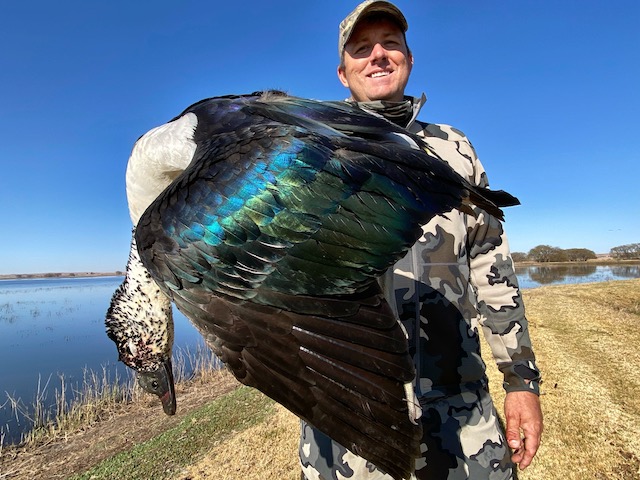