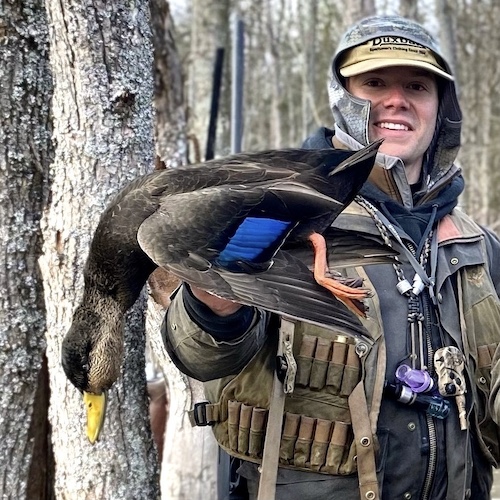 One of 13 species in the worldwide mallard complex, overall plumage on the American Black Duck (Anas rubripes) can be easily compared to that of Mallard hens, but the brown is darker, appearing black as a shadow, especially in low light (or as compared to the mallards they frequently mix with). Black ducks do not have the distinctive white tail feathers that mallard hens have. Silvery white underwing may be seen in flight. Plumage between sexes is similar, but there  bill colors can be used to distinguish drakes from hens. The drake has a yellow bill. The hen’s bill is olive green with darker mottling seen on the middle. Both sexes have red/orange legs. Speculum looks an iridescent blue to purple on both sexes. Drakes have gray/brown head that abruptly changes to black/brown after the throat and possess an eye stripe that matches the body plumage. Juveniles show the same general plumage as the hens, but with a darker green bill color. 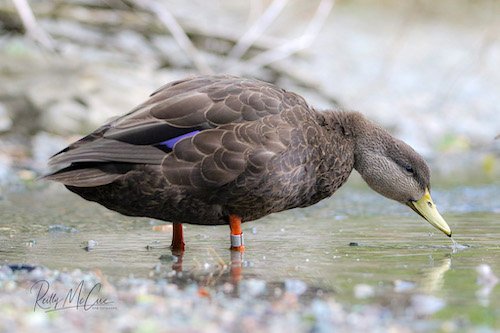 The breeding zone for the American Black Duck is Eastern Canada, with a few nesting in northern Minnesota and Wisconsin. Pairs are monogamous only during this season, although there have been reports that pairs may choose to remain together for a few breeding seasons. This species requires freshwater or saltmarsh wetlands during the breeding seasons and take advantage of shallow lakes with ample cover and wooded swamps. Favored habitats, such as tidal marsh and thicketed beaver ponds, allow them to fade like shadows into summer shade. Despite the majority nesting on the ground, some hens will choose nest in trees. During migration, black duck diet mostly consists of plant matter of all kinds and occasionally invertebrates. Their winter grounds are found in the Midwest to the East Coast near beaver ponds, crop fields, and flooded areas.

Though there was a massive 84% decrease in American Black Duck populations in the past sixty years, the decrease in this surprisingly common species has recently begun to abate. This species is thought to hybridize with mallards to the detriment of black duck population because they share habitat requirements and there is heightened competition for those limited resources. Contrary to popular belief, American Black Duck genetics are still 75% pure as described by wildlife geneticist Dr. Phil Lavretsky during a Duck Season Somewhere podcast discussion (Just a Mallard? Think Again). While black ducks will breed with mallards, they will not normally breed with hybridized offspring.