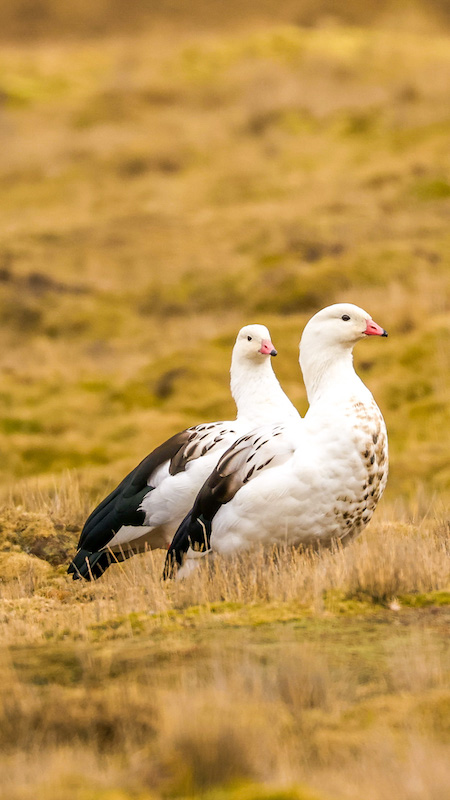 The Andean Goose (Chloephaga melanoptera), also known as the Wallata, is actually a part of the Shelduck family. They are round birds with short and stubby pink-colored bills. Their bill is tipped with black that is just a bit lighter than their small, back eyes. For the most part, the legs and feet match the bill but can sometimes look like they are also orange tinted. The head, neck, chest, underbelly, and under the tail are bright white. The white plumage gradually turns brown and into iridescent green and blue wing and tail feathers. In flight, the contrasting wing feathers are an identifying characteristic. The majority of the wing matches the body plumage, and they also display the black primaries from above and below. Females have the same plumage as males and can be identified by their smaller stature. Juveniles display duller plumage.

This Andean Goose has a mutation in their hemoglobin that allows them to fly at higher altitudes than other birds. This comes in handy since their preferred habitat year-round are the high-elevation lakes and marshes in the Andes. These wetlands are only used if there is pastureland or open grasslands nearby. The Andean Goose range extends from southern Peru, eastern Chile, western Bolivia, and western Argentina. Despite choosing nesting areas on the ground near bodies of water, Andean Geese are typically terrestrial foragers and really only goes into the water during emergencies. As terrestrial birds, they largely consume grasses, sedges, and aquatic plants.

Andean Goose social behaviors change throughout the year. During the non-breeding season, individuals will make small flocks to forage and socialize in, which normally consist of their family group. During the breeding season, however, they are highly territorial and prefer to be alone. Females alone defend their nesting territory. The breeding season is also the time of year where they are their noisiest, with males whistling pip-pip-pip-pip in a high pitch and females making low grunts.

ANDEAN GOOSE ALL ABOUT ALTITUDES, ATTITUDES. Crawling up the narrow winding dirt road, honking before rounding countless hairpin turns, stopping to photograph torrent ducks, “pircas” (stacked-rock fences), scenery, visiting with a local family that was skinning llama downtown in a dirt road village. Started seeing Andean Geese, pairs and family groups mostly, at about 10,000 feet. We’d just bagged our first duck species and Jake Latendresse was flying drone when we heard the distinctive whistling-like Andean goose calls overhead, watching a breeding pair pitch into a nearby opening. They’re mostly terrestrial, not oftentimes using water and even then mostly standing on their long legs in shallows. Loaded up, tucked out of sight behind some rocky terrain, closed the distance, me huffing and puffing at 14,000-feet worth of thin air. As much sheep hunt as waterfowl. Ranging them at 44 yards, pulled trigger when they raised their heads and began retreat. The gander was heavy, full neck as large as my forearm. First pair I shot in 2012 was at 16,000 feet. Andean geese have stark white, stubby pink “sheldgoose” bill, long orange legs, brilliant white with black primaries and secondaries that refract green and bronze in the sunshine. The teardrop-shaped spots on their scapulars are my favorite. Related to Argentina’s Magellan geese, Andean Goose  feathers are more chicken-like than honker. Capped the day as guests of local family that grow alpaca and sheep for wool. Sitting on alpaca skin-covered benches around their red-painted kitchen table they plied us with fried cachanga, hot coffee, real-Peru hospitality. Wide smiles breached language barriers. Pork ribs for dinner and coma-sleep until alarm sounded. Water runs down hill, collecting in lowlands. We went the opposite way, beyond the clouds, high into the Andes Mountains. Rewarded with species found nowhere else, unique experiences forever remembered. 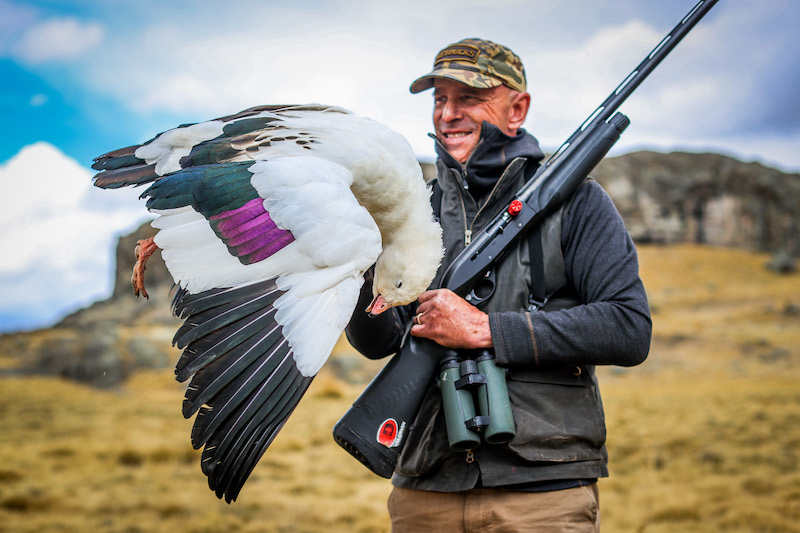