Barnacle Goose (Branta leucopsis) is a medium sized goose with a famously short and stubby black bill. The face is a bright white mask that is followed by a black cap, neck, and chest. There is also a thin line of black plumage that connects the bill to the dark black eyes. The underbelly is mostly white with light gray vermiculation on the flanks. The plumage on the back is mostly black with the same light gray vermiculation that becomes chunkier the further it descends down the back. Males and females display the same plumage.

The Barnacle Goose claims fame for breeding and nesting on incredibly high cliff faces to protect themselves and their young from Arctic foxes and polar bears. They are known to breed mainly in the Arctic Islands of the North Atlantic. From here, the Barnacle Goose population is divided into three main groups, which all have their own wintering grounds as well. The population that breeds in eastern Greenland winters in western Scotland or western Ireland. 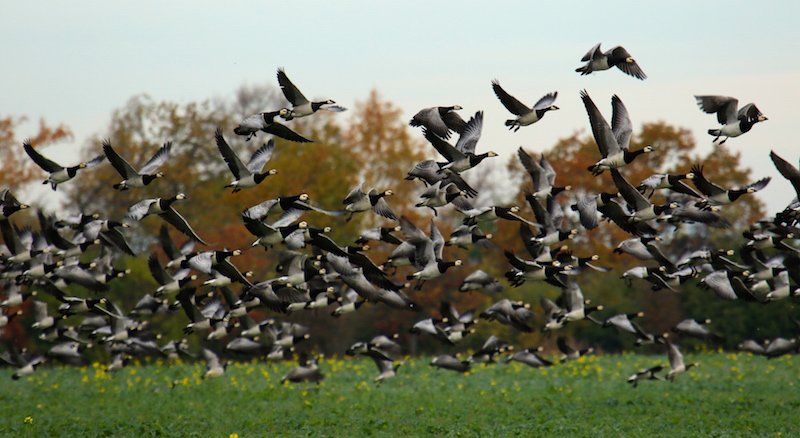 The Barnacle Goose population that breeds in Svalbard, Norway winters on the Solway Firth which resides on the England/Scotland border. The largest population of the three groups with an estimated 130,000 individuals breeding in Russia and Ukraine wintering in the Netherlands–but due to left-leaning anti-hunting/conservation in the Netherlands, many more presently are residents are are consequently exterminated routinely. There are also very small populations of feral Barnacle Geese that have escaped from zoos that occasionally find their way  to the United States and Canada.

Because of their nesting area of choice, Barnacle Goose juveniles are not able to be fed by adults. The cliffs where they reside are far away from their foraging grounds of lakes and rivers. Thus, the newly hatched young have to jump from the nest to survive. It’s all a bit of a Catch 22: starve to death or jump off a cliff. Luckily for some, their small size and large amount of fluffy down feathers protects them from injury. Those that are injured or die are scavenged by multiple predators. On the long trip to the foraging grounds, many more are killed. The survival rate, only for the first month of life, is 50%.