As seen at a distance, imagine seeing a little lemon or pumpkin resting on the bill. The rest of the bill matches the black plumage, legs, and feet. Black scoter hens lack the bill knob, but have the same, short black bill and display brown plumage with light gray brushed under the eyes. Immature males look similar to breeding females but to have a smaller, yellow knob that the breeding males possess. 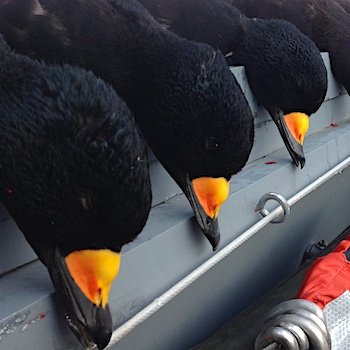 During winter, black scoter pairing begins. Breeding areas in North America are separated by the Western and Eastern populations and are dictated by where there are grasses and sedges near water within boreal forests for comfortable nesting. The Western Population is found in coastal Alaska, but Black Scoters will also breed in the interior. The Eastern Population is found mainly in Quebec, but appear in Newfoundland, Ontario, and Labrador. Males are protective of their mates and will be aggressive to other Black Scoters; that is, until the eggs have been laid. Males will then leave to molt while the young are reared by the females. This species will form small flocks and are often seen with other scoter species while foraging. The breeding season diet for this species of divers consists of insects, insect larvae, and fish eggs.

Despite preferring smaller flock waves when foraging, Black Scoters are gregarious and will migrate together in massive flocks after molting and can be found in areas of shallow waters that offer ample shellfish. Western and Eastern Populations are found along their respective coastlines on the Pacific and Atlantic, stretching the entirety of North America besides Mexico. Black Scoter diet is made up of snails, clams, mussels, and goose barnacles. Those that migrate to the Pacific Coast take advantage of spawning herrings in the Spring.