Cape Teal (Anas capensis) is a medium-sized dabbling duck that uses open wetlands in sub-Saharan Africa. The cape teal is non-migratory,  moving opportunistically with seasonal rain events. Cape Teal sexes are similar. It is very pale and mainly grey, with a browner back and pink on the bill (hatch-year birds lack the pink). The Cape Teal cannot be confused with any other duck in its range.

Thinly distributed but it is a widespread duck, rarely seen in large groups except the molting flocks, which may number up to 2000. They feed on aquatic plants and invertebrates, crustaceans and amphibians obtained by dabbling. The nest is on the ground under vegetation and near water.

This species is generally quiet, except during mating displays. The breeding male has a clear whistle, whereas the female has a feeble quack. 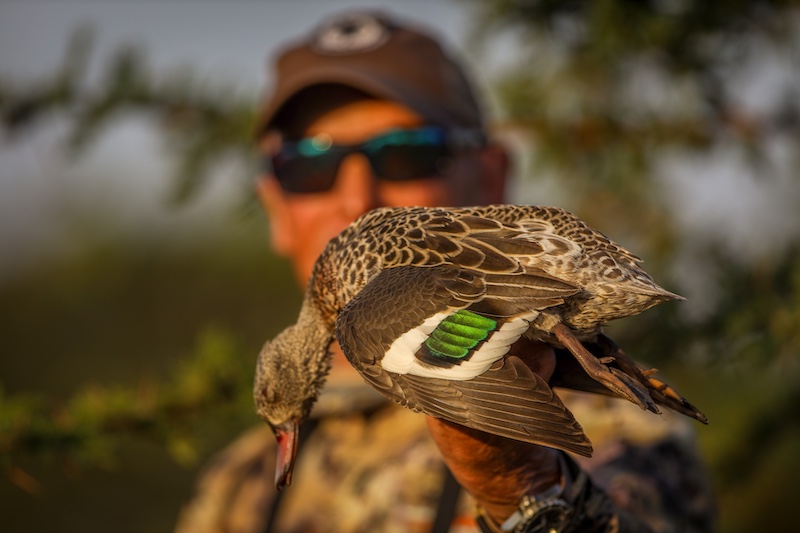 CLOSED DEAL ON CAPE TEAL. Wind swapped directions overnight and daybreak found me looking a couple miles across reservoir towards where hunted yesterday. Light frost. Brisk wind against upturned dollar, hands deep in pockets. Situated on mudflat corner, incoming ducks intermittently trading either side. Eight decoys subsidized with dead ducks if they could be reached, fresh duck customers successively decoying more readily. With patience it was easy left-right shooting mostly. Standing to shoot on a red-billed teal pair, swinging intuitively instead on the diminutive pair of prizes skimming water beneath them, scoring a two-for-one on hottentot teal. Farmer said he’d not seen any around here in years. Last volley of the morning, the couple Cape Teal that had long eluded me. A small dabbling duck endemic to South Africa, they’re non-migratory but thinly distributed. Ghostly pale in flight, smaller than red-billed teal. White wing chevrons distinct, pale pink bills noticeable to these eyes when they’re within range. And this morning they finally were.

CAPE TEAL. It’s not so much the species, as the where quests for indigenous waterfowl lead. That’s my reward anyways. Cape teal are a great example of the where. They’re sparsely distributed throughout Africa with greatest concentrations in southern portions. We finally found them late one afternoon. Driving into a rural community of small, round homes with grass-thatched roofs, lots of friendly, smiling occupants greeted us. We were within spitting distance of the Indian Ocean. From a high vantage point, we glassed marsh grass at low tide. Reminded me of rail habitat. There were cape teal feeding among brackish pools. Through binoculars: chunky, pale pairs of marbled-looking, teal-sized dabbling ducks. In flight, tell-tale wingmarkings that reminiscent of WW2 fighter jet invasion stripes. Slogging through the muck provided a few shot opportunities. And those great big holes where the water suddenly got knee deep? Yes. Hippo tracks. It’s Africa after all. In hand, ceaseless admiration. Rose-pink at the base of a bill that sweeps slightly upwards vaguely similar to common shelducks, making me ponder their dietary preferences. The paler underparts heavily spotted, almost like marbled teal. Wing markings steal the show. Inner secondaries are vividly green, outer secondaries are strikingly white, the entire speculum framed in white. We made plans to return the following year, build blinds and decoy them. Never really understanding why we traveled so far to shoot little birds in their back yards, the villagers said goodbye, trying to sell us hand-woven grass mats like the ones that covered the simple dirt floors of their homes at dinner and while asleep. For more real-time duck hunting in South Africa and worldwide, follow @ramseyrussellgetducks. 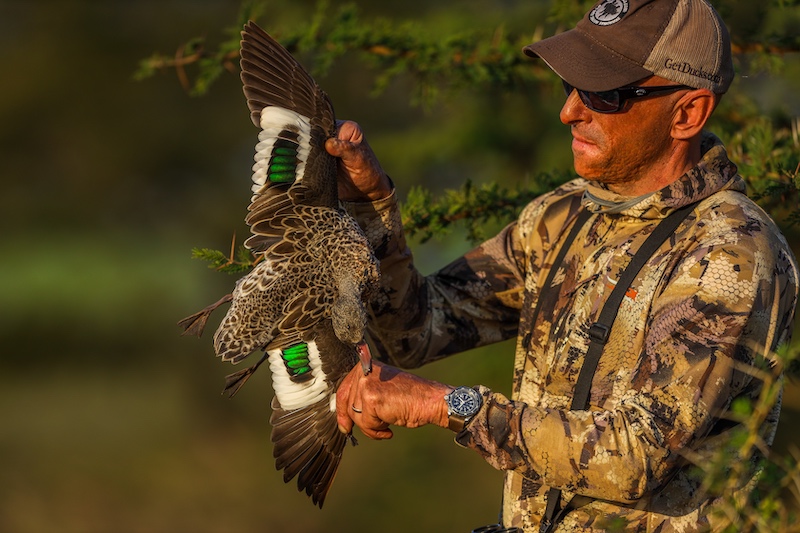