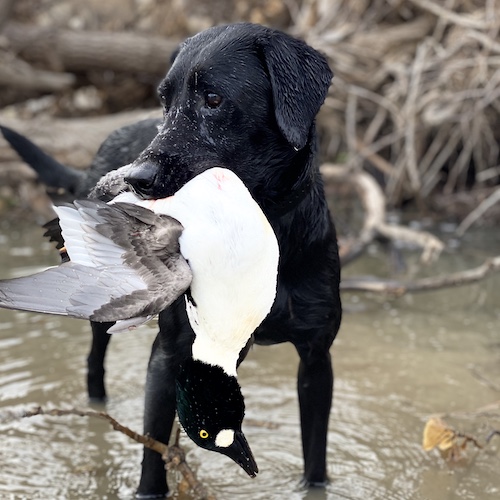 Common Goldeneye (Bucephala clangula) has a seemingly large head for its body according to its genus. Distinct characteristics for common goldeneye drakes include iridescent green heads, bright-white circular cheek patches, and piercing yellow irises. Common goldeneye drakes have short, black bills. Necks, wings, and underbellies are white. Both sexes display bright orange legs. Females display chocolate brown plumage on the head, and have whitish neck, breast, and belly much like that of the drake. In flight, common goldeneye drake have dark wings with prominent, unbroken white wing patch formed by secondaries and secondary coverts. Common goldeneye hens also have short bills, more gray than black, that will have a yellow tip appearing in spring. This differs from the bill of the Barrow’s Goldeneye hen bills that will turn completely yellow. Both sexes have similar black and white wings; drakes display white on the secondaries and coverts while hens have more scattered white. Common goldeneyes are fast fliers, their wings whistling, often heard before seen. Common goldeneye flocks are usually small and compact. 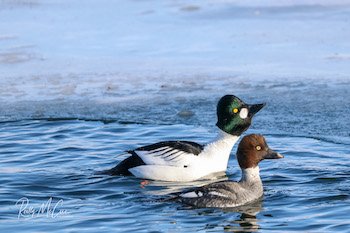 Common goldeneyes are found across the northern hemisphere with several races acknowledged. In North America they find suitable breeding grounds in boreal forests throughout Alaska and Canada. They will nest in the cavities of live or dead trees or manmade nest boxes rather than on the ground. Older pairs will often return to the same nesting sites year after year, sometimes claiming pileated woodpecker cavities as their own. For visibility, this species prefers shallow lakes, rivers, and wetlands with little vegetation.

Plants do not make up a significant portion of their diet. They prefer crabs, shrimp, fish (and fish eggs), barnacles, and insects; will eat seeds and tubers of plants when animal matter is not available. Common Goldeneyes frequently synchronize their diving while foraging. This species is fairly aggressive, usually out-competing most other ducks when defending nesting and foraging territories. They will reside year-round in southwestern Canada and in the northeast United States. Wintering grounds include every state in the U.S. and Mexico, favoring the coasts.