Greylag Goose (Anser anser) is the ancestor of current domestic geese, and their scientific name in Latin translates to “Goose goose.” This large species has also been known to hybridize with domesticated geese. Of the grey geese, Greylags are the heaviest built with round bodies and thick necks. Legs and bills generally have the same color that ranges from pink to orange that stands out from their overall dark grey bodies. The Greylag Goose chest is  a pale grey with little to no vermiculation, the rump is white, and the flanks and wings are dark grey with broad, black stripes. Overall, Greylag Goose males are slightly larger that females, with the eastern subspecies having the largest difference in size.

Greylag Goose breeds in the spring, choosing to nest in moorlands, marshes, or around coastal islands. Female incubates, both sexes take part in feeding and protecting young after they hatch. Head to wintering grounds as a family group but disperse the next year when nesting sites are chosen. Wide breeding range that extends from the west to east coast of Eurasia. Greylags are known to mate for life, with rare exceptions. They are highly gregarious and forms large flocks while migrating. During the winter, they prefer semi-aquatic, flooded agricultural or natural fields for foraging. They are found on the southern coast around India, China, northern Laos, and into the Middle East.

Greylag Geese are mainly herbivorous and prefer grasses over everything. They also forage for plant tubers, berries, and duckweeds. A smaller portion of their diet consists of small fish, amphibians, and aquatic invertebrates. This species does not mind foraging in the same pastures that are occupied by farm animals so that they have access to crops.

Some individuals in southern England and/or urban areas are residents. While being a Eurasian species, Greylags have been introduced to southern Australia as well. In Norway and the Orkney islands, the Greylag Goose population has exploded and it has caused considerable damage to agricultural land. Because of this, the Orkney islands has extended the hunting season to be almost year-round. Due to anti-hunters banning goose hunting in the Netherlands, greylag geese have forsaken migration, taken up residency and presently cause millions of dollars crop depredation. Consequently, Greylag Goose are euthanized by the thousands and incinerated (but shhhhh, don’ tell anyone because the Netherlands does not anyone knowing they’re the world’s largest hypocrits!) 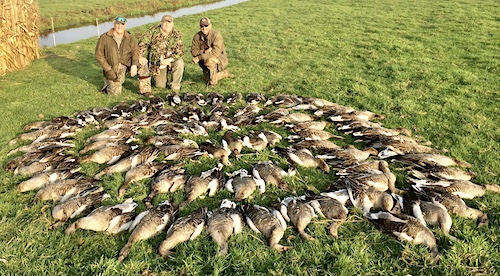