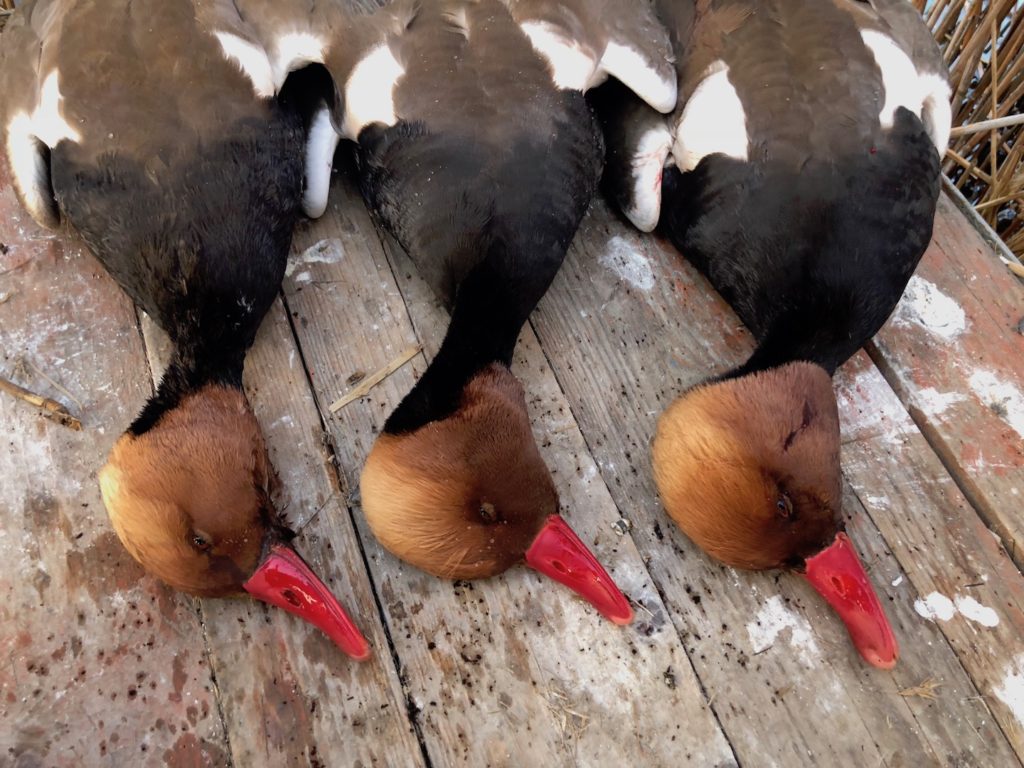 Red-crested Pochard (Netta rufina), a large diving ducks with bright red bills and uniquely prominent foreheads. Bills are thin and hooked at the tip, which is an ivory color. Their eyes are also a brilliant red that somehow stand out from their chestnut head plumage. Red-crested Pochard rump and breast plumage is jet black and extends to the back of the head. The rest of the body is a gray-brown on the wings and stark white underbellies. In flight, besides the bright head plumage, the wings are easily identifiable by the white plumage outlining either side of the light brown feathers. Red-crested Pochard females are completely brown with varying shades. The dark brown cap on their head is the most prominent feature. Bills are typically a gray or black with a pale orange tip.

While this is largely a migratory species, there are small pockets of resident Red-crested Pochard populations in Europe, with the largest found in Spain. Breeding populations are found from the British Isles to China. Wintering Red-crested Pochard populations are scattered throughout Eurasia that are categorized into three groups: The Black Sea, Eastern Mediterranean, and the Central European groups. Preference for both breeding and non-breeding grounds revolve around the availability of larger eutrophic lakes,  reservoirs, and slow-moving rivers that have adequate shrubs and grasses.

Red-crested Pochards forage by both diving and dabbling. They will mainly forage for any part of aquatic vegetation, and have also been documented to eat aquatic invertebrates, mollusks, small fish, and amphibians during all life cycles. Red-crested Pochard males will bring food to the females during courtship displays. After choosing a mate, pairs prefer to find secluded areas and either build nests on the ground in dense vegetation or on platforms of floating vegetation. Only females take part in incubation and rearing of the young (10 weeks until they fledge). During this time, the males will congregate in well-known areas to molt together.

The red-crested pochard was personally among the last big unicorn species for me, and we found them not far from the Caspian Sea, in Azerbaijan. Not sure how I became so enamored with them but sure glad I did. Again, the “where” proved as rewarding as the actual bird.

RED-CRESTED POCHARD. Go this far for a unicorn species, you’ve got to consider risks versus rewards, the possibility that you might go home empty-handed, with nothing to show but memories of an adventurous experience. It happens. Have not yet discovered anywhere better than Azerbaijan to nag a trophy red-breasted pochard. They are one of 3 species in the Netta genus, the other 2 being the rosy-billed pochard of South America and the southern pochard, primarily of South Africa. All 3 species have dark boodies with white stripes along the primaries and secondaries. They’re technically divers but don’t feed as deeply as Athya species. As with rosy-billed pochards, they feed primarily on submerged aquatic vegetation. I’ve usually shot them in water depths knee deep or less. While skinning red-crested pochards, their crops are full of submerged aquatic vegetation similar to wigeon grass. First I ever shot were working an open bay, responding immediately to growl-like calls, strafing the decoys moments later, leaving 3 drakes in their wake. 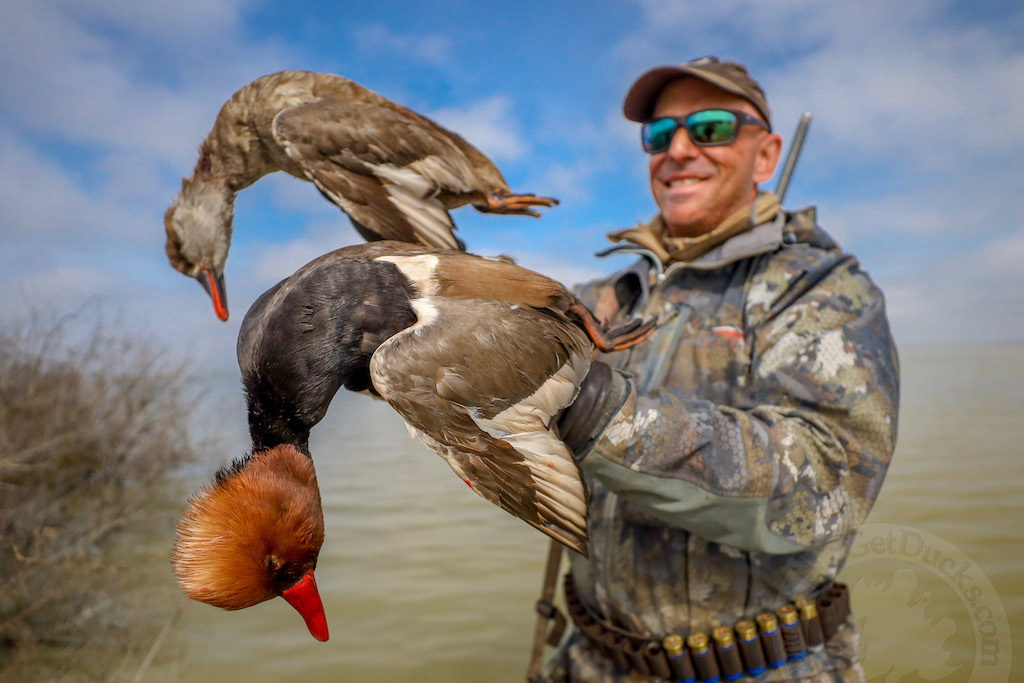