Western Capercaillie (Tetrao urogallus), also known as the Eurasian Capercaillie, Wood Grouse, Heather Cock, Cock-of-the-Woods, or Capercaillie, is the largest living member of the grouse family. Male Western Capercaillie plumage is overall dark which contrasts with the ivory-colored bill, small red eyebrow patches, and singular white spot seen near the bend of the wing while at rest. The chest is a dark iridescent green. The plumage on the head, neck, underbelly, and part of the tail are light blue-gray with slightly darker dappling. The wings are a chocolate brown. The longer tail feathers are black with white patches that look like paint splatter. When calling and displaying, the plumage under their chin and down the front of the neck stand up on end. Females resemble most grouse species, displaying varying tan, brown, and white vermiculation. Along with differences in plumage, females are half the size of males.

Western Capercaillie are residents in the northern region of Europe and the Palearctic. They commonly breed in areas with mature conifer forests with high biodiversity in plant species. Large populations are found in Norway, Sweden, Finland, Russia, and Romania. Remote Russia offers the best hunting opportunities, and hunting them during the spring calling season is very best.

CAPERCAILLIE HUNT. Years ago during first trip to Russia, I really had no idea. It was a 12-hour Drive from St. Petersburg to the White Sea in northern Karelia province. We left the cabin at 10 PM, walked 2 miles into a million acre stand of Black Forest, down a bear trail as the sun set. Stood in the darkness for an hour and a half, listening. It was utterly silent. So silent I imagined hearing our breath turn to frost. Or maybe it wasn’t imagination. Twenty miles from the arctic circle, it’s only dark briefly but takes 4 hours for the sun to rise. During that time the capercaillie cocks sing on their lek. It’s a 4-note sound. Sounds like a marble dropped on a wet table, bounces twices and ten kindof just rolls. Perched, they sing with their eyes closed and between notes 2 and 3 a gland in the ear swells rendering them momentarily deaf. Take two quick steps, crunch crunch in the snow. Then don’t move. Their eyes are open as they look for hens. If everything comes together, the distance is closed to within 30 meters, the bird can be seen and BANG is shot. It took 3 nights of the most wonderful adventure I’ve ever experienced. At times close but couldn’t see. Nothing but shadows backlit by gray sky. Or the bird flushed. I missed at least once. On the third morning we found a hot bird that sang well into the morning. Peering around a tree, I saw him atop a hemlock, looked like the angel on a Christmas tree as a single beam of light lit his iridescence. Shouldering the gun, I realized while pulling a trigger that I was smiling.

Western Capercaillie once had a wider range, but has gone extinct or has dwindling populations in Scotland, Bavaria, and Germany. They are a very popular bird in Central Finland, where they are pictured on the coat of arms and is named as the region’s bird. Can hybridize with Black Grouse and Black-billed Capercaillie.

They claim fame with their well-known and intricate courting rituals. The beginning of the season, males will only display on thick tree branches, singing to the surrounding females. Near the end of the season, males will display on the ground and this is when the breeding season technically begins. Females alone take incubate the eggs. Chicks are not fed by the parents, rather, they forage independently on insects. This species does not remain with their family groups for long, with chicks leaving their mothers around September each year.

CAPERCAILLIE REDEMPTION. Got snowed out on capercaillie last time but made up for it this morning. Textbook perfect capercaillie hunt, shot at 15 meters as he sang his heart out. The stock creased my smile as squeezed the trigger. Three capercaillie for 3 trips to Russia. #GetDucks in Russia, the world’s most noble gamebird. (We 5 hunters have shot 7 capercaillie and 3 black grouse in 4 days. Hugely successful hunt.) 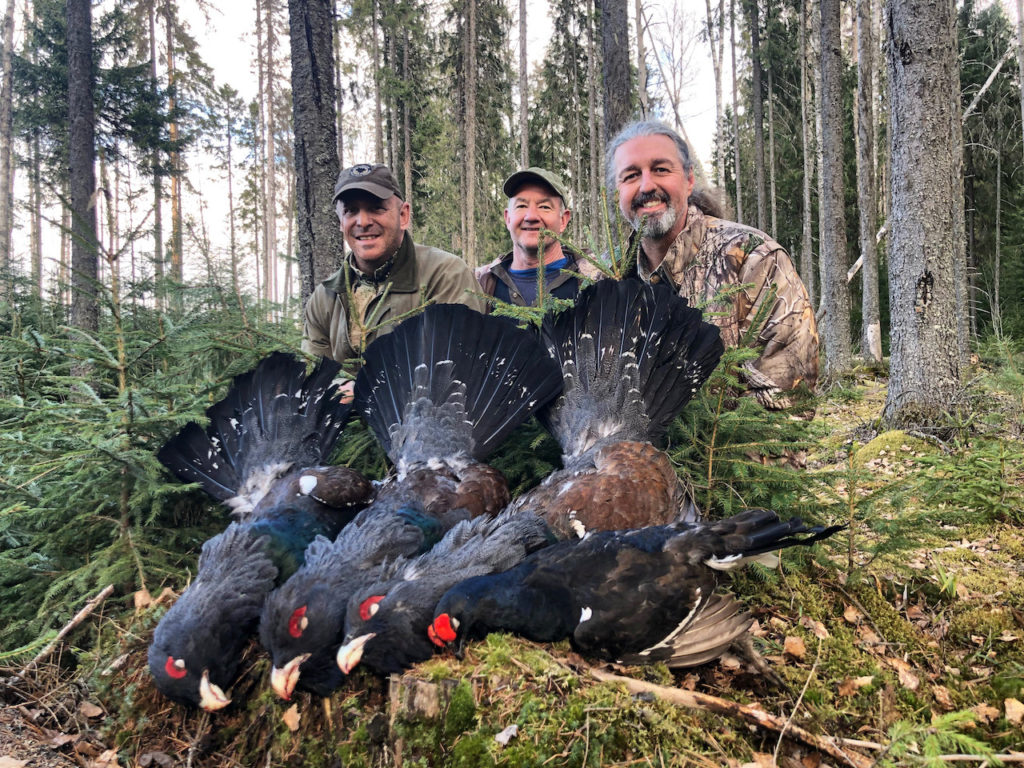