"My brother and I got to shoot a “double”! We haven’t done that for quite some tim..."

Did I say a lifetime experience? Yes, indeed I did.

I happened to see GetDucks.com’s 100% donated auction item for a Alaska King Eider hunting trip at the Dallas Safari Club’s Visions Convention banquet in January 2012.  An opportunity I just could not pass up.  A duck hunter’s dream…a hunt of a life-time! My preparation was made even easier by the help I received from Anita Russell, and Ramsey was always in the background to help on specific hunting questions such as hunting gear, ammunition, the whole hunting experience.

The guides know their business.  Their equipment was in great shape.  Their long-time experience and knowledge of sea duck hunting was quite evident, especially when it came to hunting king eiders in Alaska.  They were extremely safety conscious and Michelle was a great cook with her home made three squares a day, including steak, fresh snow crab, chicken, stews and soups, fresh baked goods, desserts and snacks.  The accommodations were more than likely the best on the island.

Did I say a lifetime experience?  Yes, indeed I did.  I got all four of the major species – especially the magnificent King Eider, which is limited to four only.  This Alaska King Eider Hunt was one of my most memorable hunts.  Call Ramsey Russell at 866-438-3897 or go to GetDucks.com and get your reservations made early. 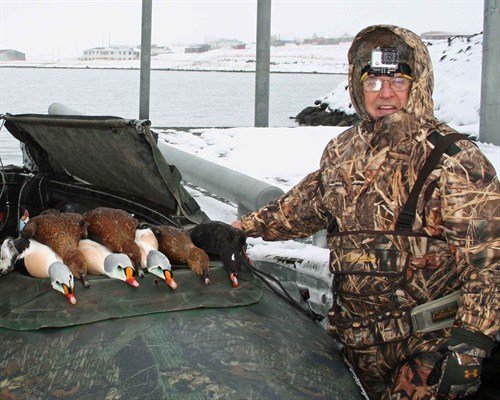