Bufflehead (Bucephala albeola) is coined from “buffalo-head,” comparing the small diving duck’s remarkably over-sized head to that of a bison.  Bucephalas literally translates to “ox head,” implying that all 3 golden-eyed ducks within the genus have extraordinarily large heads.  In the right light, the bufflehead drake’s black head shimmers like an oil slick, showing magnificent green to violet iridescent arrays.

Bufflehead drakes have a prominent white area surrounding the back of its head. Bills of both sexes are short and blunt, males and females both displaying bluish gray coloration. The hen bufflehead’s bill matches their legs and feet. Bufflehead drakes have large bubblegum-pink legs and feet, which are easily seen in flight along with their unusually long tail for divers. The drake’s wings have a unique white patch originating in the speculum and extending diagonally through the upperwing coverts. Females have plain brown heads with white streaks daintily painted on each cheek, and overall gray brown plumage. 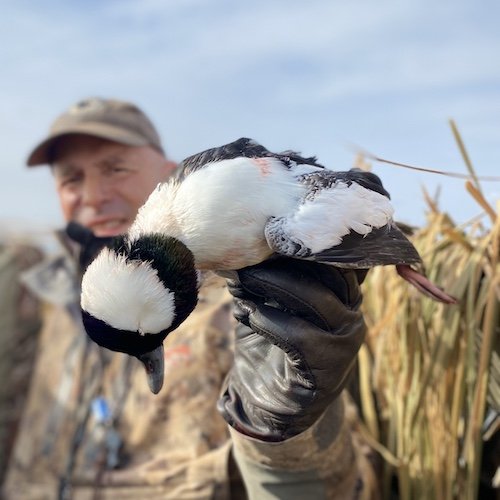 One of the few times bufflehead are found outside of the water is during the breeding season. Their breeding zone encompasses most of Canada and Alaska, with a few breeding in Washington, Idaho, Montana, Oregon, California, and Wisconsin. The majority are found in British Columbia, Alberta, Yukon, and Saskatchewan. Buffleheads will either nest in natural cavities made by woodpeckers or manmade nest boxes. Natural cavities in aspens are preferred, unless this species is found in California, in which case they are most often found using pine trees. Unlike many duck species, buffleheads are mostly monogamous, remaining with the same mate several years. Even though they are a diving species of duck, the ducklings are sometimes seen dabbling. After the breeding season, buffleheads migrate throughout the U.S.  and Mexico. Highest concentrations are along both United States coasts. Their distribution is much more widespread than their goldeneye counterparts.

Bufflehead foraging sites are shallow waters with little to no vegetation, and food is usually consumed when they are still underwater. This species has also been observed foraging on mudflats. The bufflehead’s diet primarily consists of aquatic invertebrates such as shrimps, crabs, and snails. They also eat small fishes, pondweeds, and bulrushes. From New York finger lakes to Mississippi River oxbow lakes, sizable rafts can be encountered on large freshwater bodies where they respond readily to decoy spreads. A common hunting tactic is to place a single or couple bufflehead head decoys outside the pocket. Proving birds of a feather flock together, they nearly always seem to fly into these decoys. Have heard buffleheads called “butterballs” but don’t know how this nickname originated.