Canvasbacks (Aythya valisineria) are the largest North American diving duck species. Oftentimes referred to as “the King,” of North American waterfowl, they are widely revered by American hunters.  Their distinctive wedge-shaped head is formed by a long bill somewhat bulbous at the base and adjoined to a somewhat sloping forehead. Drakes readily identified by their white, lightly vermiculated “canvas-like” back and underbelly that contrasts with black chest and mantle on one end; black rump and tail feathers on the other end; chestnut colored head and neck, black bill. Drake’s bright red eyes boldly stand out. Drake’s upper wing coverts heavily vermiculated, oftentimes appearing pearly white.  Canvasback primaries are relatively darker. Hen canvasbacks have a buffy, light brown head that trails down the chest with a white eye stripe and patch on the throat. Females have a mostly gray body with brown coverts with white dappling, and blue gray bill. Legs are blueish, appearing short and wide compared to the rest of the body. In flight, rapid wingbeats and v-formation flocks. 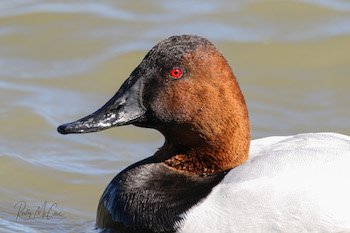 Canvasbacks primarily live on the water, rarely coming ashore. Their nests are usually built in the shallow water close to the shore among the reeds, sedges, and cattails. Canvasback breeding distribution ranges from Alaska, into Canada, and the northwestern States in the U.S., with the highest population densities in central Canada and North Dakota. While hens often participate in intraspecific brood parasitism, other species such as redheads and ruddy ducks will also lay their eggs in empty canvasback’s nest.

Canvasbacks prefer deep waters year-round for foraging, as they can dive up to seven feet below the surface in search of seeds and tubers of aquatic plants, mussels, and insects. Their scientific species name is derived from water celery, which at one time was their preferred food material and imparted, it was thought, the unique flavor for which canvasbacks were famous during the North American market hunting era. Mark Twain considered wild canvasback among the most quintessentially American meals, and it’s been said that a wild-harvested canvasback dinner in New York City once cost a week’s worth of  laborer wages!

During the wintering period, canvasbacks may be found in the majority of the United States and Mexico. The most concentrated densities are likely found on either side of the Mississippi River in the southern states.  Louisiana’s Catahoula Lake reputedly overwinters one-third the continental population of canvasbacks at times. Some of the best canvasback hunting I’ve ever personally experienced was near the mouth of the Mississippi River.