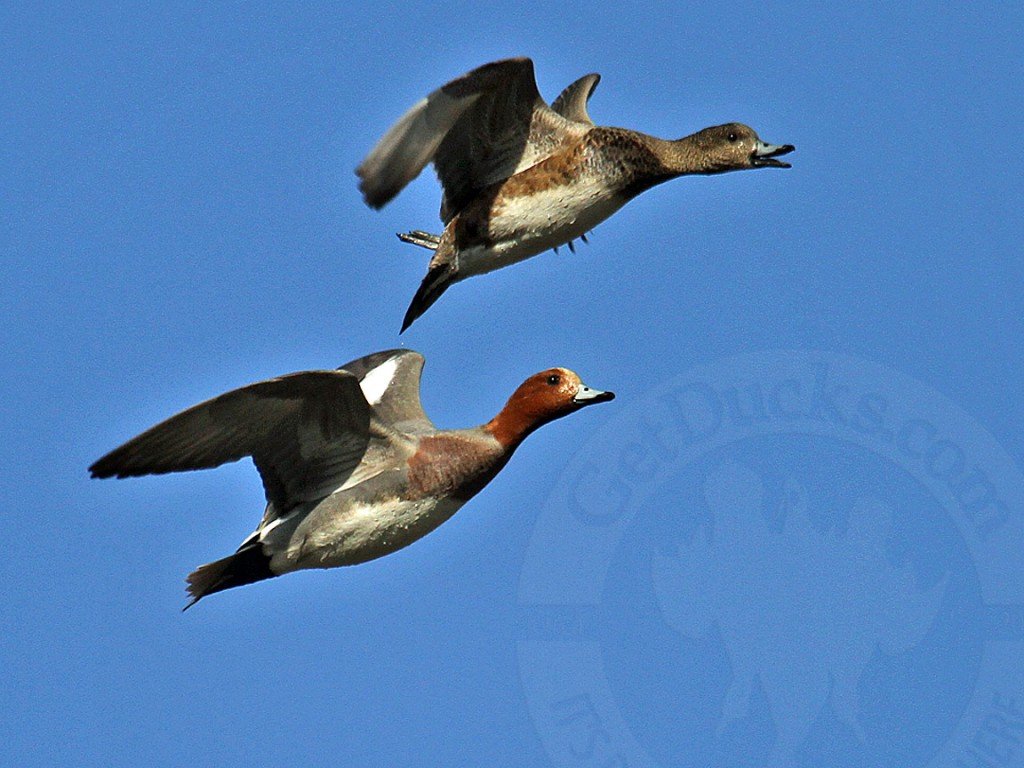 Eurasian Wigeon (Mareca penelope) is a dabbling duck species among the 3 wigeon subspecies worldwide.  The Eurasian Wigeon’s head is mostly a rusty color, with white or cream plumage beginning at the bill and running up the forehead to the crest. When seen at a close range, males have small, iridescent green patch of feathers around each eye. Bills appear to be a pastel blue with black tips. Throats are typically black, chests are a creamy brown, and underbellies are white. The plumage under the tail is an incredibly dark black that is difficult to miss. Much like the Common/Eurasian Green-winged Teal, the plumage on the sides and back of this species are densely vermiculated with white and black. Eurasian Wigeon females lack this vermiculation and only display different shades of brown. The blue bill and stark contrasting, simple, deep brown wings are easily identifiable characteristics of this species when at rest or in flight. Both sexes have an odd-looking head that has a larger forehead than most waterfowl species.

While a common species in the Old World, Eurasian Wigeon will come and winter in Canada and The United States of America, likely after migrating from eastern Siberia and Iceland. They have not been documented to breed there. Rather, typical breeding grounds are found in the northernmost regions of Europe and Asia. Populations that migrate from these areas winter in the warmer regions of southeast Asia and central Africa.

During both the breeding and wintering seasons, Eurasian Wigeon can be found in open wetlands such as marshes that contain tall vegetation, where they forage for mostly plant matter. As documented in the United States, habitat that is used by American Wigeons has correlated with the areas that these sporadic Eurasian Wigeon visitors favor and thrive in. When in the US, these two species will form large flocks together that can be extremely noisy, especially since the males have very clear whistles that are long reaching. 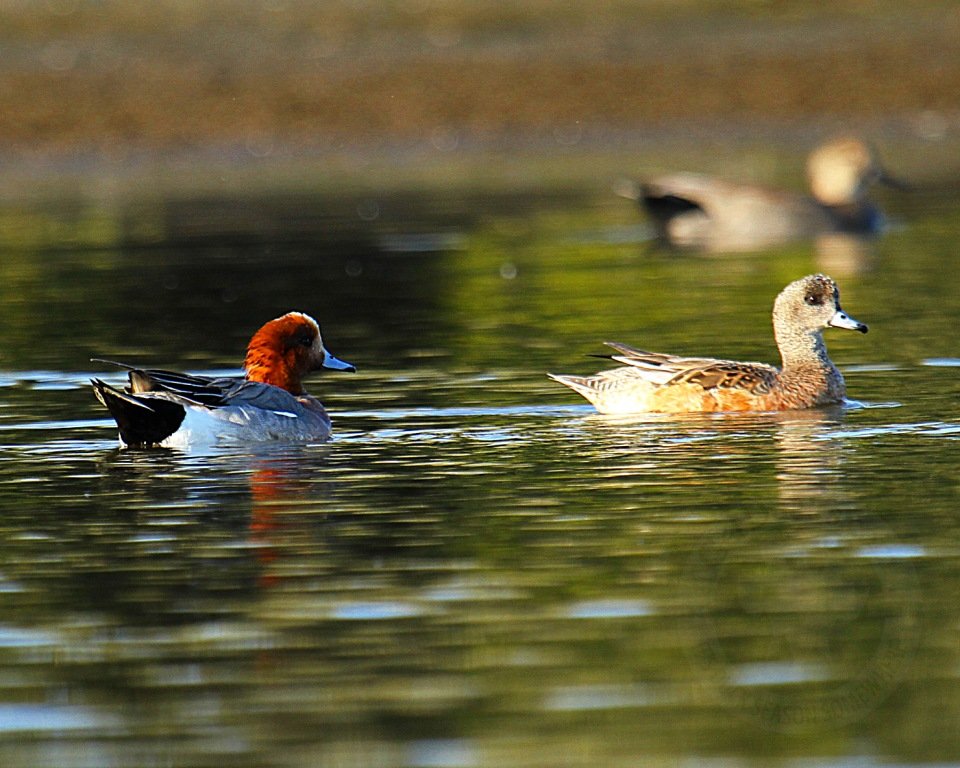 EURASIAN WIGEON. Sweeping over the wetland suddenly, a heavy fog obliterated the brilliant sunrise, turning the entire viewable world a monochromatic gray. Cold humidity sinking through layers and into my bones as i faced downwind, alert. Even in graytones, the single was immediately recognized. Wigeon. Not for the colors, but for the way it came towards the decoy, wings locked, slicing through air space as deftly as a champion figure skater tucking into a vaulted spin. Hooking over the pocket then launching upwards, wings never beating. White underbelly. Visible short sprig. Stopped then by a single shot. In hand, admiration. Pink chest, orange-chestnut head with cream-white crown. Heavily vermiculated back and sides. Striking white wing bar, a brush stroke of sparkling green speculum across its black secondaries. And again a single bird pulls a slow hunt out of the shitter.

Have seen variability among Eurasian Wigeon head coloration, some orangish, some maroonish. First of many European wigeons taken years ago near the White Sea in northern Russia, a drake pulled from a tall pair, landing crippled well offshore. The Russian guide finished it off with a point-blank full pattern blast that obliterated it, proudly holding it up. Russian guides are like that. Have since taken more in Mongolia, Romania, but never really got into the thick of things with them until hunting in Azerbaijan. Along with gadwalls they’ve been a daily staple. Drakes are very distinctive in flight. They decoy well to calls. They’re the loudest of the world’s wigeon species. Their piercing whe-o’s beckon as from the marsh’s dark shadows as we push-pole to the blind each morning. 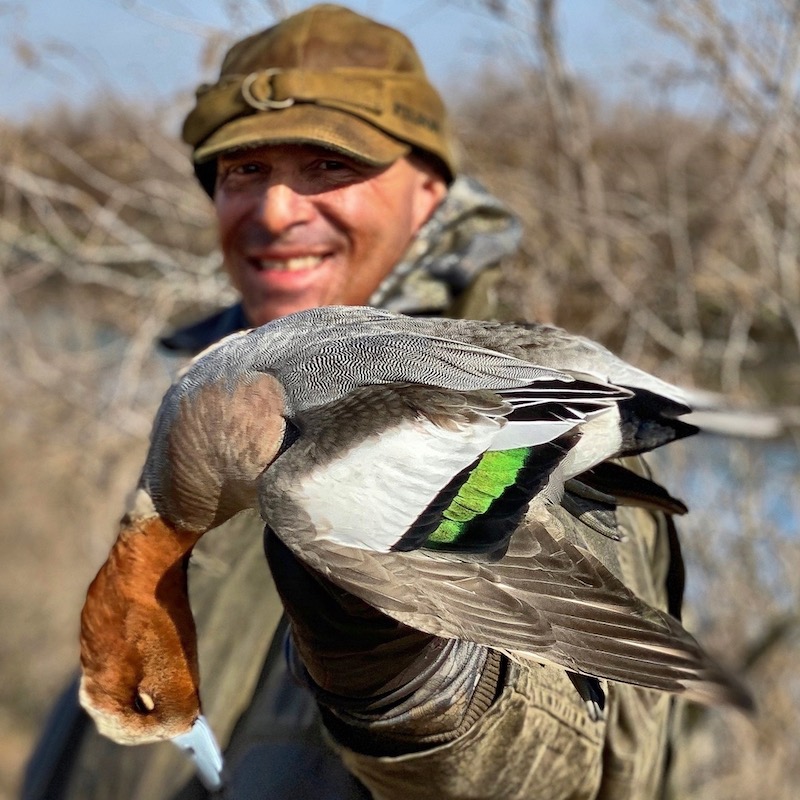