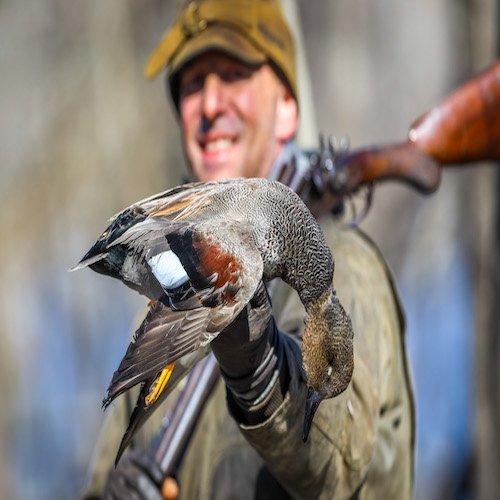 Gadwall (Mareca strapera, formerly Anas strapera) possess a simple beauty of gray and brown. “Gray ducks.”  In hand, ornate black vermiculated markings seem drawn by a calligrapher’s hands. Breeding gadwall drakes with beautiful copper-toned scapulars. This medium-sized dabbler has black rear end accompanied by conspicuous white speculums which are easily be seen in flight or while swimming. The upper secondary coverts on drakes are black, contrasting the white coverts to be noticeable. Chestnut upper wings most developed in adult drakes. White bellies and underwings conspicuous in flight. Drakes and hens both have pale yellow legs, that match the female’s bill. The drake bill is the color of pencil lead. Characteristics attributed to the hens are a whitish throat, faint eye stripe, and a dark crown. Male vocalizations are distinctive one syllable grunts, Nhek.  Hens quack hoarsely. 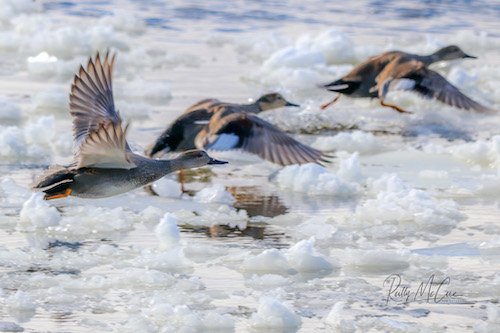 Gadwall breeding distribution in North America is mostly the Western United States, up into Canada and Alaska, though the majority will choose to stay in the upper western states and the surrounding Canadian area. This species also almost exclusively breeds in prairie potholes in the Great Plains and up into the Canadian Prairies. They breed across the Palearctic, too. Breeding season diets are recorded as being half animal matter and half plant matter, whereas other times of the year they primarily consume plant matter. This species has shown a greater next success rate than other prairie nesting ducks due to selecting nesting sites in extremely dense cover.

In North America, gadwall wintering distribution is the southern half of the United States and Midwest, following up the east coast, and down into Mexico. Beaver ponds, cypress brakes, fresh and saltwater marshes, and farm ponds are suitable for this species during this time. Plant matter such as coontail moss, duckweed, and widgeon grass, and animal matter such as snails and midges, are preferred diet. Gadwall will often steal food from diving ducks (such as American Coots) when they make it back to the surface, and do not make the best dinner guests. Globally, gadwall are found throughout most of Eurasia.