Northern Shoveler (Anas clypeata) is named for its conspicuously spatula-like bill (i.e. the Spatula genus). This is by far the most distinctive attribute that makes these medium-sized dabblers stand out. Drake northern shovelers tend to have black bill color, while hens possess the typical yellow-orange bill. Other defining characteristics for both sexes are yellow eyes, bright orange legs, and short tail. Identification during flight includes the “hunched” appearance of the body, relatively narrow wings and slow wingbeat. Similarly to other species within the Spatula genus, northern shovelers have prominent blue upper wing and flashy green speculum which are divided by a white line of plumage. As compared to blue-winged teal drakes, northern shoveler drake wings are distinguished by visibly white primary feather shafts. Drake northern shovelers have dark green-blue head and neck (darker than the typical mallard green), stark white chest, and blocky, light chestnut plumage directly under the wings. Hens are mottled brown.

Northern shoveler breeding zone ranges from the western US, through Canada to Alaska. These birds can also be found breeding in Europe. Grassy fields are the preferred nesting habitat for this species. Habitat requirements for foraging are often fulfilled by shallow wetlands with plenty of vegetation. There, northern shovelers will keep their heads down and use their unique bills to filter seeds and small crustaceans from the water. This diet gives them the reputation of being unappetizing to eat, such that hunters in many locales will not shoot them. Most hunters agree that northern shovelers “taste like ducks,” especially when feeding in agriculture and other freshwater habitats.

Northern shoveler’s wintering zone includes western and Southern US, Arkansas, along coastlines and “across the pond” in Eurasia, northern Africa, and India.  This species readily uses stagnant and murky types of waters, but also frequents estuaries, flooded fields, and lakes. During breeding season, these monogamous birds will choose their mate and remain with each other until fall migration begins. Throughout the United States and Canada, the northern shoveler represents the Rodney Dangerfield of waterfowl (“no respect”) as denoted by a long list of colloquial nicknames to include spoonie, smiling mallard, hollywood, bootleg, baloney snatcher, Ramzilla, etc. Yet elsewhere throughout the world that the northern shoveler is hunted, it is regarded as simply another duck species.

According to the U.S. Fish and Wildlife Service, Canadian Wildlife Service, and other partners, northern shoveler estimated total population for 2019 is 3.6 million. Despite the 13% decrease in Northern Shoveler populations in from 2018 to 2019, the overall population has increased by 39% in relation to long-term abundance studies. 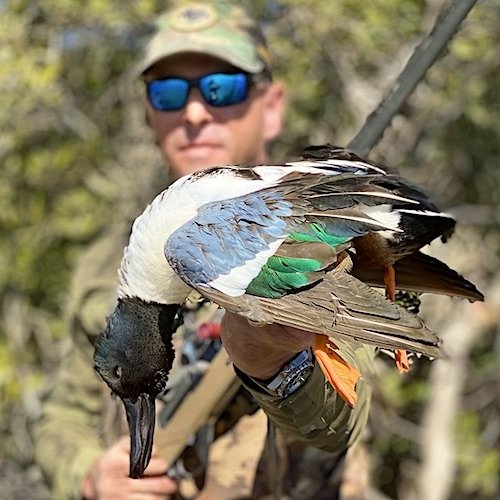 SPOON AND CROCKETT. Shovelers are the most ubiquitous species in western Mexico. Not the only species, but there are many. Not necessarily the most abundant, either. But they’re everywhere in Mexico. And of course I shoot ‘em plenty. They don’t call ‘em Ramzillas for nothing. All jokes and biases aside, they’re beautiful. And I think northern shovelers are one of the hardest puddle ducks to get a truly primo specimen.

Seems like spoonies are “dirty” until their second adult breeding molt, at least, and i don’t think they complete their breeding molt until late. Small, teal-sized duck, lots of relative wing size. Flying a little slower, they tend to get center-pattern clobbered. All this to say that as a no-holds-barred shoveler shooter, the really good “spoon and crockett” ones with a solid white mantle, thick neck, no pin feathers, bad breaks or feather damage seem harder to come by and really stand out when Char Dawg delivers to hand.