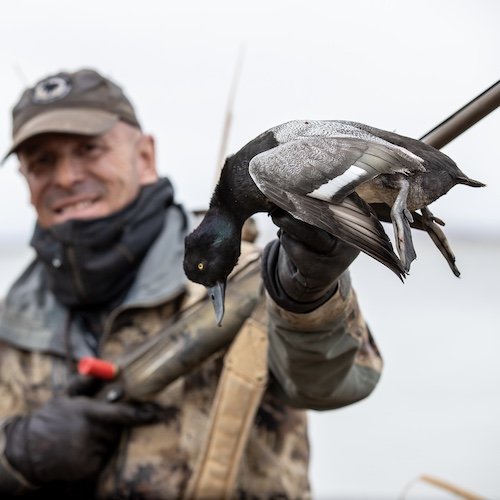 The Lesser Scaup (Aythya affinis) is the most abundant diving duck in North America. Lesser scaup are the North American counterpart to the Old World tufted duck. Depending on where you’re hunting in the US, you’ll hear several nicknames to include blackheads, bluebills or dogris (pronounced doe-gree). Drake scaup display monochromatic color scheme, finely vermiculated plumage, bold yellow irises and the blue-bills from which they’ve derived their colloquial moniker.  Upperwings are dark, very finely vermiculated; secondaries are white. Both sexes have blue gray bills tipped with black, however the hen has a much darker color. Both have short, gray legs and feet. Hen scaup have white plumage around their bill and a gray brown head. The drake has a black head that extends to the chest, a white underbelly, and white and gray vermiculated body plumage. The hen also shows this white underbelly however has chestnut plumage covering the rest.

While both are referred to as blue-bills, following are a few clues for differentiating between lesser scaup and relatively less abundant greater scaup. Both have white secondary bands, but the white is limited only to the secondaries in lesser scaup. In greater scaup, this white band extends into the primaries. In hand, the black head sheen is  purplish on lesser scaup but a greenish on greater scaup. Greater scaup bills are slightly wider, giving rise to the colloquial nickname “broadbill.”

Lesser scaup can be found breeding in the prairie pothole region in the Northern United States and Canada, taking advantage of fresh and brackish waters. The most concentrated areas of use are central Canada. Hens choose to nest either on the ground in tall prairie grasses or build platforms above the water. When ducklings down dries, they immediately leave the nest to join the adults in the water. During the other times of year, lesser scaup use any kind of water for foraging. The lesser scaup’s diet is primarily made up of aquatic invertebrates, such as insects and mollusks that are found in soft mud. They also readily consume stems and seeds of emergent aquatic plants.

Lesser scaup may tend to range further south than greater scaup. The wintering region includes the west and east coast of the United States, the southernmost states, well into Mexico. Many reside in Florida, California, Oregon, Washington, and the Gulf of Mexico. During the non-breeding season, it is common to see the Lesser Scaup socializing or flying with other ducks such as greater scaups, canvasbacks, and redheads.

Scaup are an important species to the US hunting tradition, especially in the northern half of the US. Interestingly, despite a continental population greatly exceeding redhead and canvasback, scaup limits were only one daily throughout much of the continental US  in 2020. Blue-bills are a bread-and-butter duck for many die-hard diver duck hunters. For more information, listen to the Duck Season Somewhere podcast episode But What About Bluebills?