White-faced Whistling Duck (Dendrocygna viduata) is a species of waterfowl that is difficult to confuse with any other species. Their namesake is their mostly snow-white face and throat that contrasts highly with the jet-black back of the head and neck. For the size of their head, their black bill appears elongated and the tip curves down sharply. Like other species of whistling ducks, White-faced Whistling Ducks have somewhat long necks and legs, giving it an upright posture. The legs and feet are gray, and the feet are relatively large.

The bottom of the White-faced Whistling Duck neck has rusty red plumage that extends down to the chest and changed quickly do a black underbelly. The flanks are barred with tan and black or white and black plumage. When at rest, the wings are a beautiful chocolate brown that are lightly edged with chestnut. When in flight, the wings are very dark with dark gray being the primary color. Males and females display similar plumage and juveniles do not have the same stark contrast on their facial plumage. At a distance, they can be distinguished by their three-note whistling call. 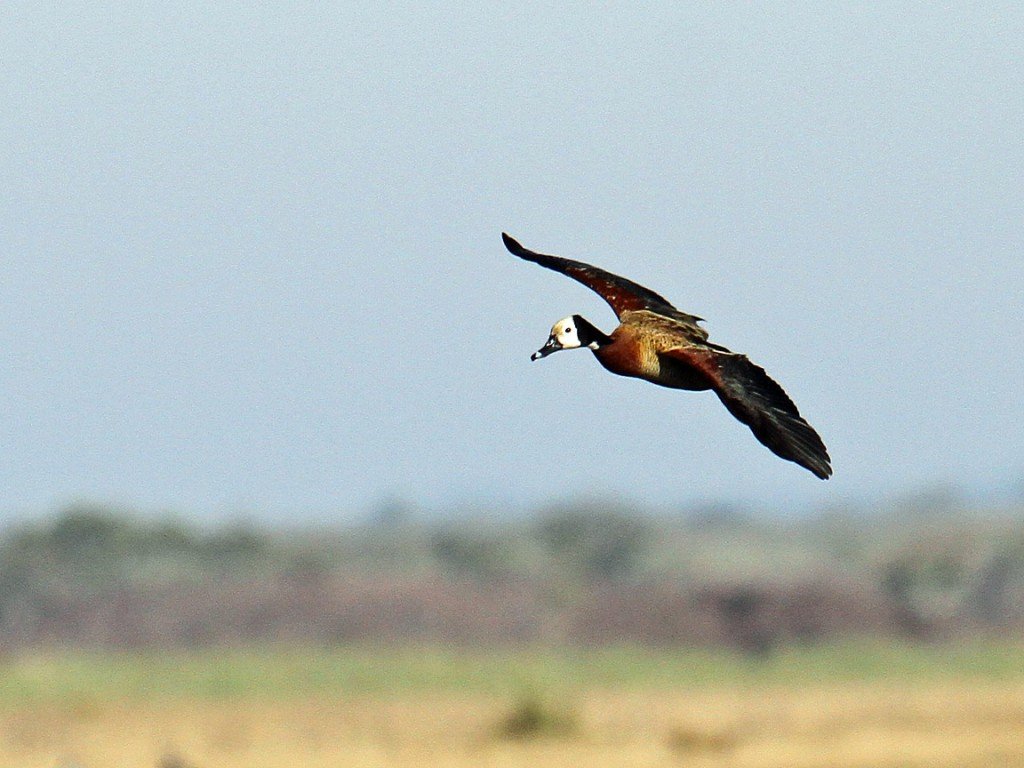 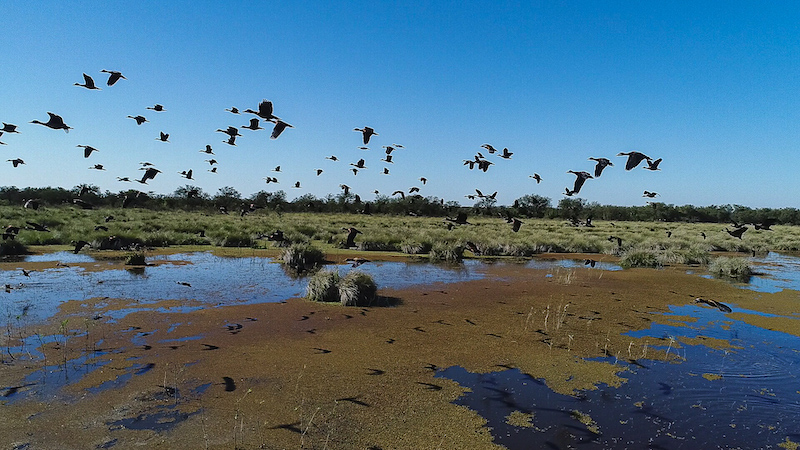 White-faced Whistling Duck is an abundant species that breeds in sub-Saharan Africa and South America. A single subspecies is recognized. In South America, it can be found almost anywhere besides the west coast. This White-faced Whistling Duck species as has also been released and escaped from private collections in Florida, though it is assumed that the small population does not breed. They are known as residents in most areas within their range and only travel when in search of adequate resources. They are highly gregarious and can be seen in flocks in the thousands.

The beginning of the rainy season is also the beginning of the White-faced Whistling Duck’s breeding season. Nests are created from stick platforms near the ground or, less often, nests are built in trees. This species is known to either nest on their own in very small colonies. Each clutch can range from 4 to 13 eggs and young fledge at around 8 weeks old.

Hunting white-faced whistling ducks can be challenging. Most active very early in the morning and very late during the afternoons, they tend to loaf on shorelines and shallow water throughout most of the day. They’re gregarious, usually traveling in sizeable flocks, always flying high. Hunters must be especially concealed because the flocks decoy from above the decoys, giving them a bird’s eye view of shining faces and movements. They respond well to calls and decoys. Most Argentina guides that hunt them use whistles fashioned from shotshell brass to call them. Expect to find them in greatest abundance associated with marshland habitats and along riverine systems. 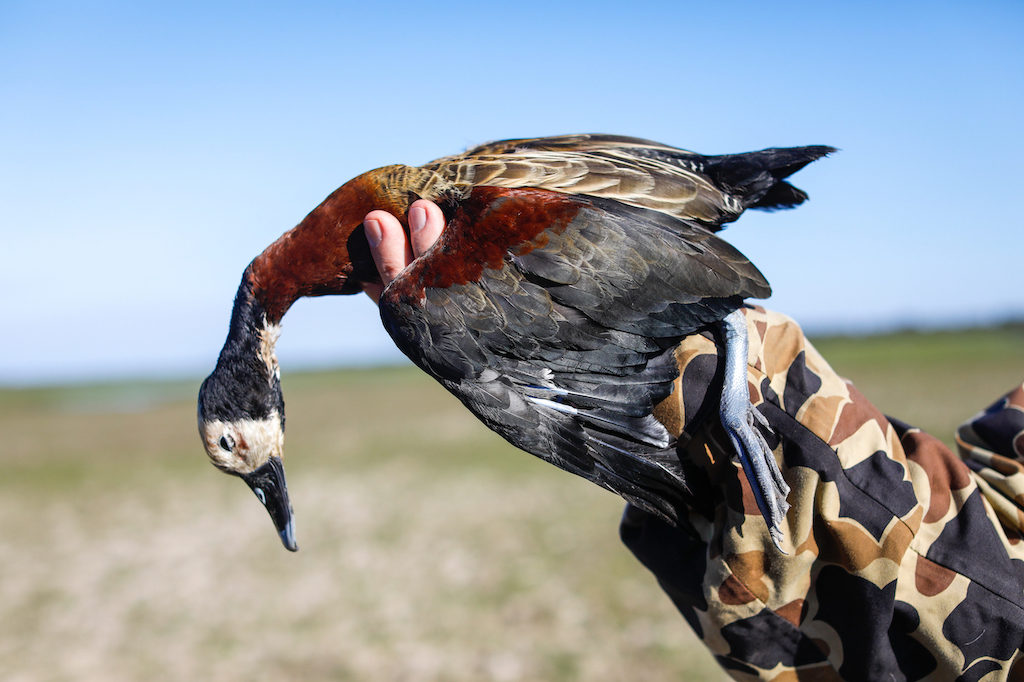 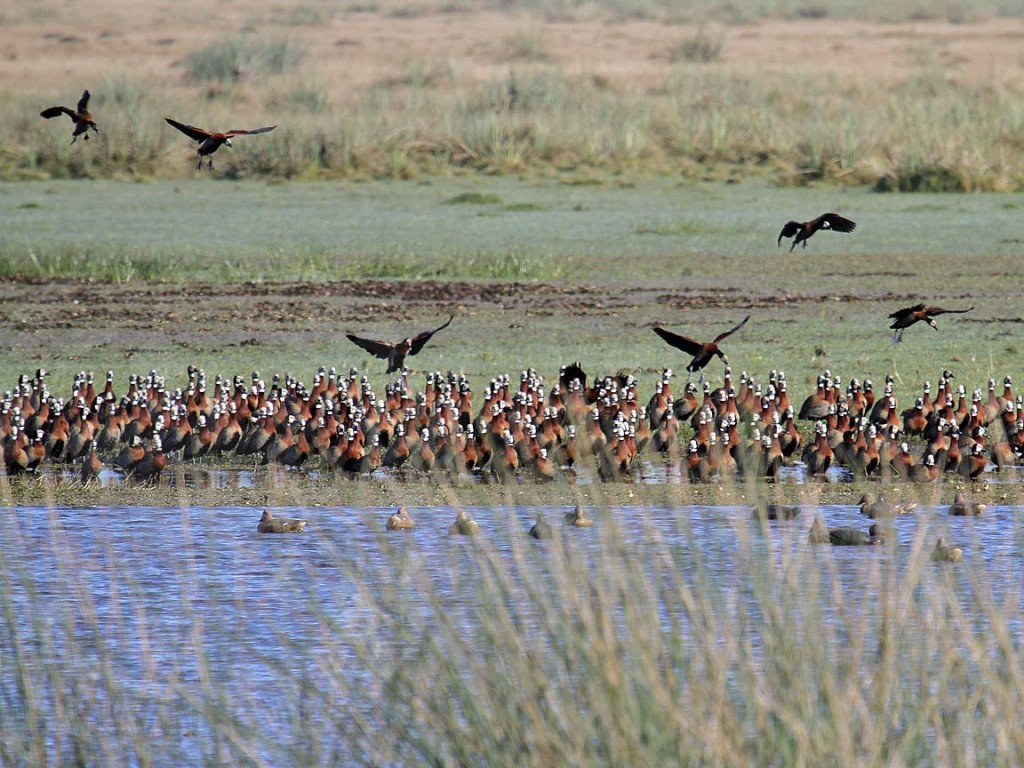