Black-headed Duck (Heteronetta atricapilla) is a South American duck that is a part of the stiff-tailed duck tribe that includes the North American Ruddy Duck. Despite being in the same tribe, they lack the stiff, upright tail. The most obvious characteristic of this species is their mostly blue (or gray) bill with red coloring near the base of the bill. the obvious hook in the bill is black. As their name suggests, they do have completely black heads. The rest of their plumage is a mixture of grays and browns. Directly underneath the black plumage is tawny or rusty plumage that extends to the underside of the body. Their backs are normally a darker brown or gray. Their long bill very gently slopes off of the head. Their bodies are also somewhat elongated. Female Black-headed Ducks do not have the distinct blue bill or black head. Rather, their bill is a gray color with muted red, and the head plumage is more brown. Overall plumage is a duller version of the males.

The small Black-headed Duck resides in swamps, lakes, and marshes in South America. Their range extends from central Chile, Paraguay, Uruguay, northern Argentina, and southern Brazil. Foraging behavior for the Black-headed Duck species is primarily dabbling, even though they are physically shaped more like diving ducks. They gravitate towards wetland areas with plenty of reeds. They are not a species that will form large groups, and they are seen either alone or in small groups (up to 40). They have been recorded to sleep with Lake Ducks.

Black-headed Ducks are brood parasites. During the breeding season, females do not make nests, and will find the nests of other species to lay their eggs. Common species that receive Black-headed Duck eggs are the Rosy-billed Pochard, coots, gulls, herons, and sometimes birds of prey. Luckily, the adoptive parents do not have to care for the young because juvenile Black-headed Ducks leave the nest almost immediately.

BLACK-HEADED DUCK. Systematically aligned with stiff-tailed ducks (ruddy ducks), it doesn’t really belong because it lacks the stiff tail, bulky neck and swollen bill characteristics; it’s behavior most resembles pochards and dabblers. Relatively dull colored, it’s best identified by its elongated shape, rocket-like speed and trajectory, during flight. Requires lead and follow through! At a distance, it’s a dull brown bird. In hand, intricate vermiculated patterns lend subtle beauty. Drakes live up to its black-head name designation. The bill is slate-blue with a red base that brightens during breeding season. They prefer larger marsh habitats and are notorious parasitic nesters. 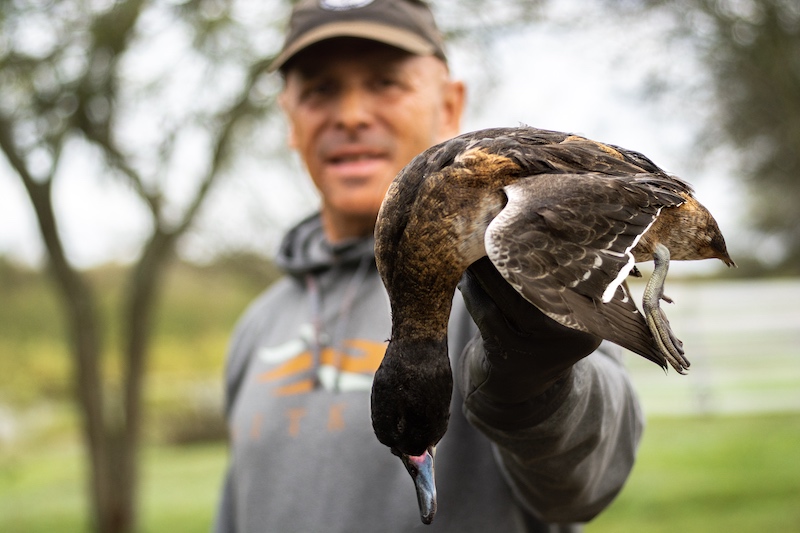