Speckled Teal (Anas flavirostris) are found throughout South America’s eastern side. Their northern-most limits extend to central Colombia and their southern range to Tierra del Fuego, at the southern-most tip of South America.

Speckled teal vary in size, shape, and color, depending on age, sex and subspecies. They are a relatively small duck. Female speckled teal are slightly smaller than males. Coloration is more subdued than other ducks in the genus Anas. Speckled teals generally have dark colored spots on the neck and breasts that extend towards anterior regions of their bodies. They have tan to brown feathers with black tips. Bill coloration varies with subspecies but is either yellow or blueish gray. Female speckled teal are less colorful than males,  juveniles less colored than adults.

Some speckled teals are migratory, but others remain in the same general area. Southern populations often migrate north to wintering grounds. Mountainous speckled teal populations may migrate to lower elevations at this time. 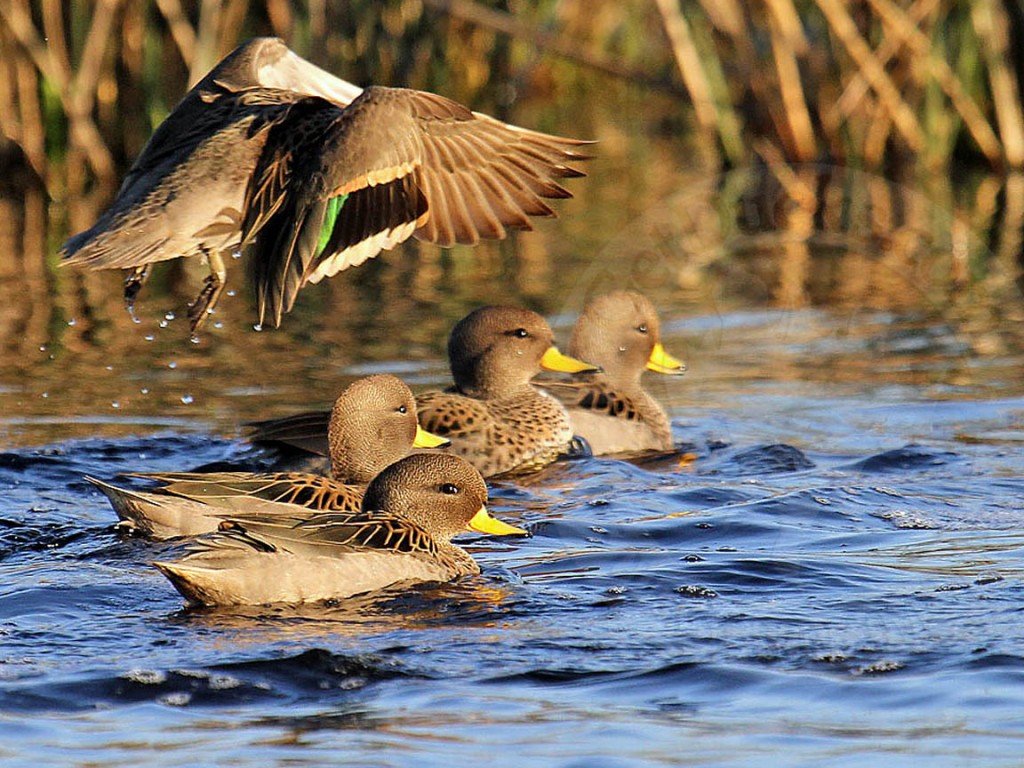 Speckled Teal is separated into two distinct groups: the Yellow-billed Teal and the Andean Teal. Both of these species are small in stature and considered dabbling ducks.

The Yellow-billed Teal’s namesake is a vibrant yellow with a thick band of black that runs down the middle and onto the bottom of their bill. While overall light brown and gray in color, the head is very finely speckled with dark brown spots on a light background. The spots gradually get larger and farther apart as the plumage travels from the neck, down to the chest, and some of the underbelly. While at rest, the plumage on the wing is very dark brown to black and it outlined gently with a chestnut color. Underbellies are typically gray. While in flight, Yellow-billed Teal display mostly gray wings with a black speculum that is outlined in white. A few speculum feathers closest to the body are a bright, iridescent green.

This species of speckled teal has a wide range and is fairly common, so the IUCN has labelled them as Least Concern on the conservation status tier list. During the breeding season, they can be found at high elevation freshwater lakes, marshes, and coastal lagoons, although the Chilean Teal prefers to only breed in valleys near the Chilean coastline. Pairs are monogamous and stay together year-round. These dabbling ducks forage for aquatic invertebrates, kelp, and seeds. The type of aquatic invertebrates depends on the region and can include amphipods, mollusks, and cyclops.

This species of speckled teal lack the characteristic yellow bill of its counterpart, and is overall a very dark bird. They display similar fine speckling on their head and display a darker background color, differentiating this species even more from the Yellow-billed Teal. The same concept of the spotting becoming gradually larger also translates to this species. Their bill is blue-tinted gray. While at rest, the wing feathers are beautifully dark and finely edged with a reddish tan color. Their black speculum can sometimes be seen while at rest as well. While in flight, they display dark gray plumage and a black speculum. Lining the top edge of the speculum are copper feathers and bottom edge is more of a tan. The last few feathers on the speculum nearest to the body are slightly yellow-tinted iridescent green.

Andean Teal spends most of its time in freshwater wetlands, including marshes and bogs with very little salt, rather than rivers. Nesting habitat provides thick vegetation and numerous trees, as this species build their nests in large forks created by the trees. Both males and females take part in rearing and protecting the young. Although the population of Andean Teal is not small, they do not have the same abundance as Yellow-billed Teal. They are typically seen with their mate or in loosely-formed small flocks.

SPECKLED TEAL. A dabbling duck germane to all habitats hunted in Argentina. They seem to be most abundant near agriculture and throughout the pampas region, but are commonly found in shallow marsh areas and associated riverine habitats. They respond well to decoys. Known to commonly nest in trees, I’ve also observed them on estancia rooftops. They became among my Argentina duck species favorites several years ago for personality witnessed following a hunt. After that particular hunt, the light was ideal for photography and decided to film. A speckled teal flock began congregating a very short distance away, fewer than 20 meters, but knowing I was there they’d not come closer. They grew increasingly “hangry” (agitatedly hungry), and began scolding each other. I enjoyed witnessing such colorful personality through the camera lens. 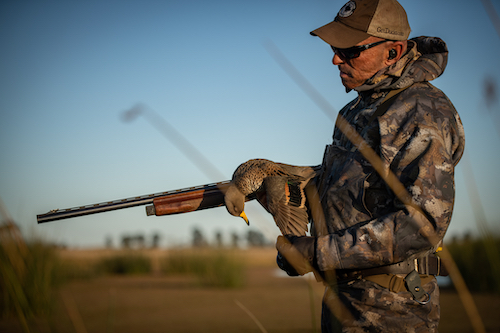