Ocellated turkey hunting to complete the World Slam eventually takes you to the forests of Mexico’s Yucatan Peninsula, the only area in the world inhabited by huntable numbers of the colorful, extremely long-spurred Ocellated Turkey. Our Ocellated Turkey hunt is located a in the heart of the jungle, a short drive from the Campeche airport. Guests are greeted at the airport and transported to the lodge.

Ocellated Turkey hunts are typically 5 days. A typical day’s Ocellated turkey hunt begins with a wake-up at about 4 a.m. After breakfast, hunters depart with their guides to the morning hunting ground, usually within about 30 minutes of the lodge. In the dark, hunter and guide listen intently for the low-pitched song of the male ocellated turkey that begins with the drumming of wings followed by the uniquely beautiful sounds (Click HERE to hear the Ocellated Turkey song). Stalking is a proven ocellated turkey hunting method, as is hunting near water and food sources. Calling can also be effective at times.

With 15+ years experience, our small staff is friendly and knowledgeable. Guide-staff are expert ocellated hunters with a deep knowledge of the region. Our host speaks fluent English and will serve as your interpreter during the trip. Their hospitality and guidance will enrich the hunting experience. Trophies will be very skillfully caped and prepared. Importation permit information is provided during the pre-trip planning process, but we suggest you opt to have our ocellated turkey hunting outfitter ship your trophy capes directly.

Our ocellated turkey hunting packages include free use of shotguns (12 gauge shotguns in excellent condition) as well as ammunition (typically something along the lines of lead Remington 2 3/4″ BB that is manufactured in Mexico). Additional ocellated turkeys and trophies are also available – gray brockett deer, coatimundi, Great Curassow, Crested Guan and javalina are also hunted with great success. 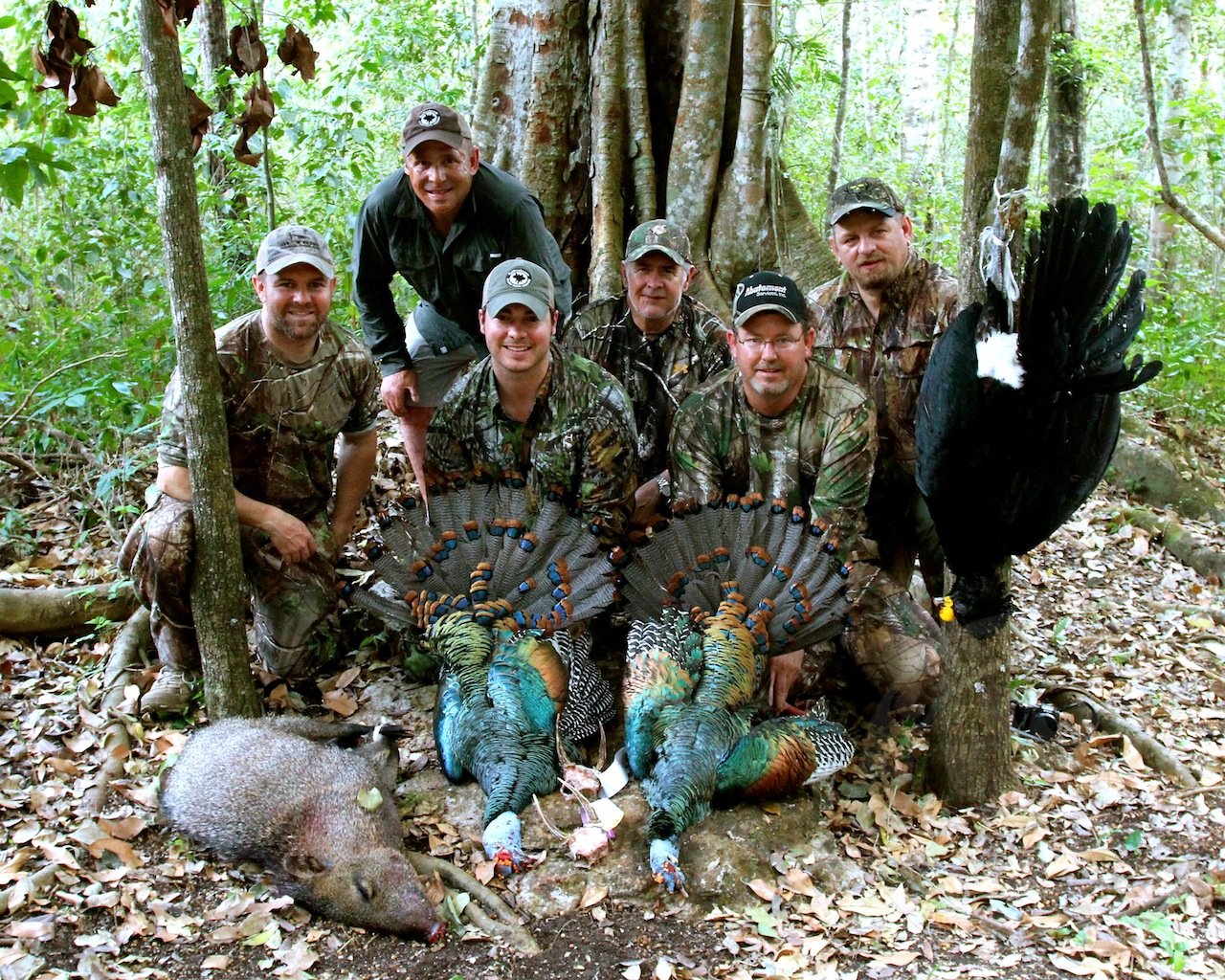 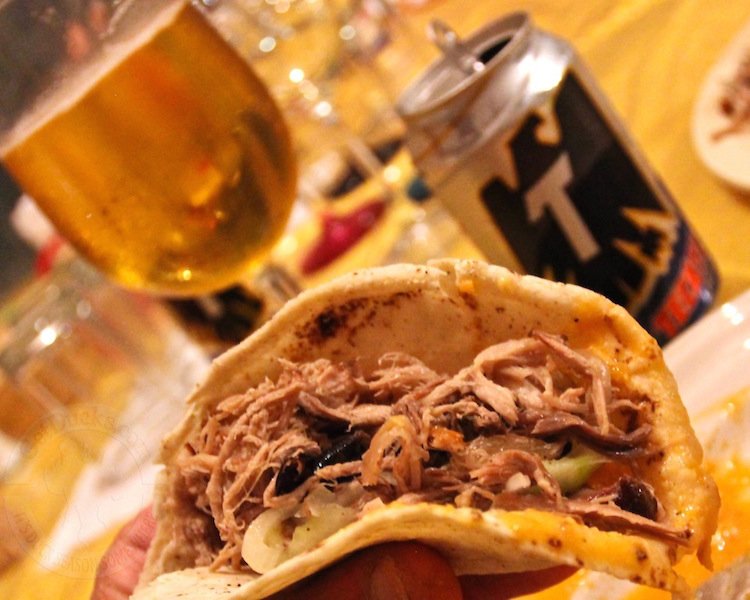 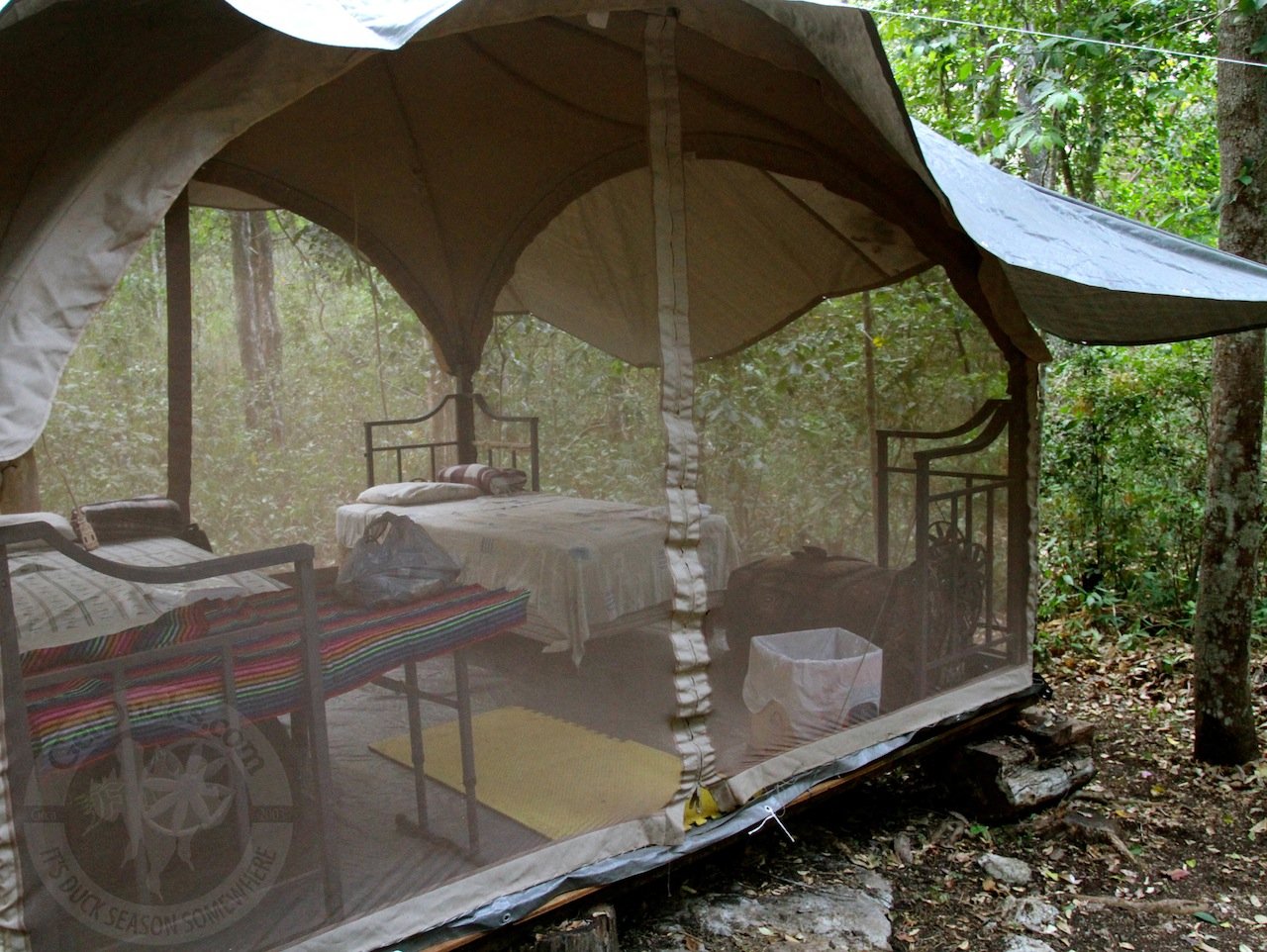 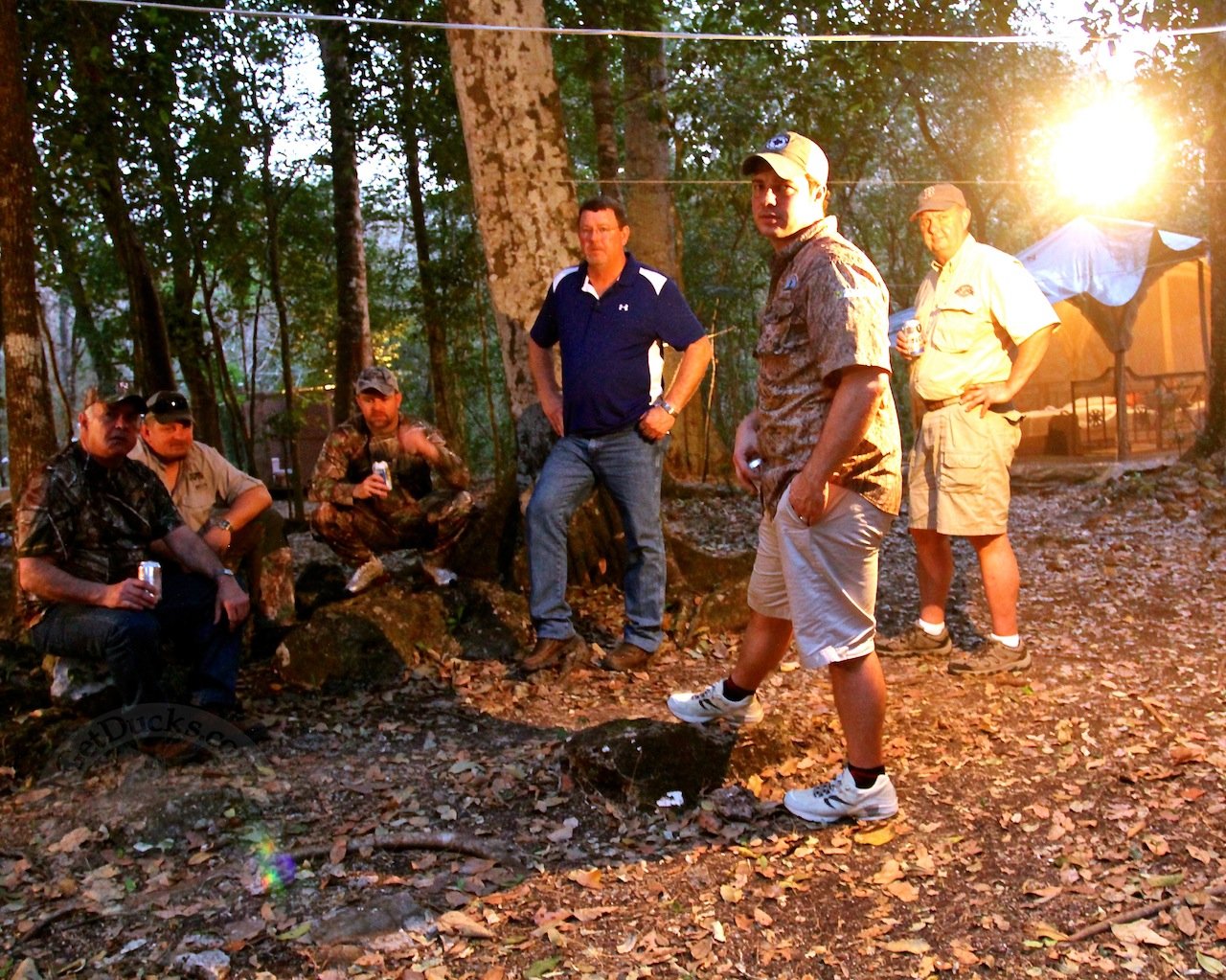 Day 7. After a continental breakfast, guests are transfered to Campeche hotel or airport. There are 3 departing flights daily, and you can arrive in Campeche to make 11 a.m. or 6 p.m. flights.

Campeche is a beautiful town.  The historic downtown is surrounded by old Spanish fort walls from the bygone era that defending itself from pirates of the Caribbean was necessary.  The streets are filled with tourists, there are many great restaurants that specialize in seafood and other local specialties within easy walking distance of the Comfort Inn.  For guests that prefer to arrive a day early or stay an extra day, it’s a great place to do so. 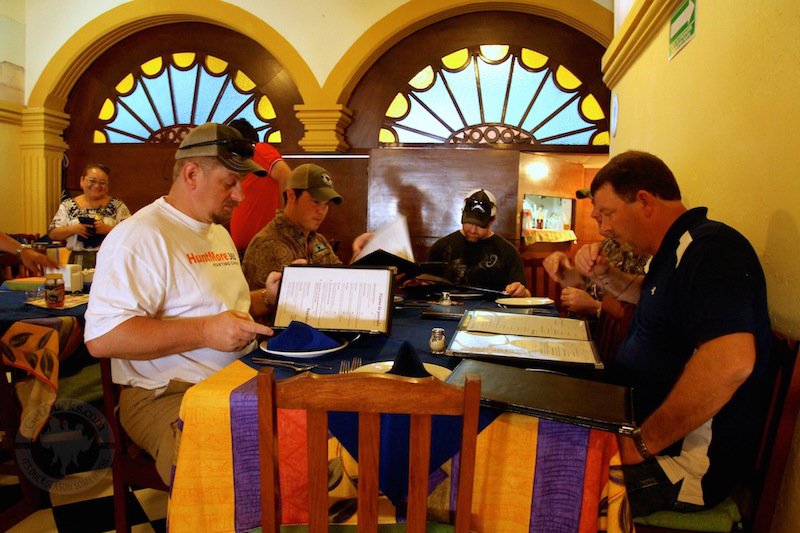 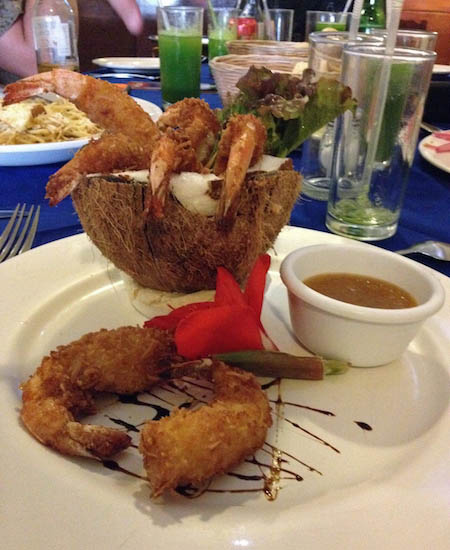 Below is a list of suggested to-bring items for Ocellated Turkey Hunting in Campeche, Mexico, garnered from years experience and client suggestions:

*A What-to-Bring List is included with our customized Pre-Trip Plan.

Ocellated turkey hunting deep in Mexico’s jungles is an immersive experience that’s everything a proper adventure should be and that no air-conditioned lodge will ever equal. From monkey’s swinging through the tree-tops over camps to jaguars roaring in the distance, this productive environment yields a surprisingly bountiful of harvest of wild games, as judged by game seen and brought to bear heavily on game pole daily – memories to last a lifetime. Seeing hunters hoist their first ocellated turkey, that sparkles like a precious gem even under the forest canopy, never gets old. During the most recent hosted ocellated turkey hunt trip, 6 clients harvested 11 ocellated turkeys, 2 trophy brocket deer and a curassow in only 3 short days. Having killed ocellateds before, I was content to go with a camera but managed a sapote-fattened javalina that we enjoyed for supper one night due to the camp cook’s expertise (and I’ll keep that recipe handy in upcoming hunting seasons). Among the many reasons to return again: shooting an ocellated turkey through the seemingly impenetrable forest proved far more difficult with a camera than with a gun – 30 feet is so close and yet so very far away. 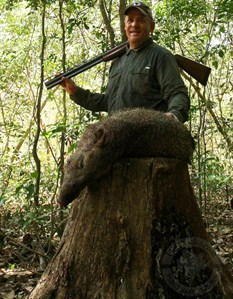 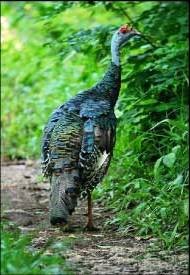 There are only two species of turkey in the world; the North American wild turkey (Meleagris gallopavo), divided into five distinct subspecies, and the ocellated turkey (Meleagris ocellata). The ocellated turkey is known by several different names that vary by Central American locale: pavo, pavo ocelado, or its Mayan Indian name, ucutz il chican. Very little research has been done on the ocellated and less is known about the ecology of this turkey than any of the five subspecies of North American wild turkeys, including the Gould’s. The National Wild Turkey Federation, in partnership with the Wildlife Conservation Society and Hornocker Wildlife Institute, helped sponsor the first research project to trap and place radio transmitters on ocellated turkeys in Guatemala in 1993. Much of the information provided in this bulletin is a result of this NWTF-sponsored study.

The ocellated turkey exists only in a 50,000 square mile area comprised of the Yucatan Peninsula range includes the states of Quintana Roo, Campeche and Yucatan, as well as parts of southern Tabasco and northeastern Chiapas.

The ocellated turkey is easily distinguished from its North American cousin in appearance. The body feathers of both male and female birds have a bronze-green iridescent color mixture, although females sometimes appear duller in color with more green than bronze pigments. Unlike North American turkeys, breast feathers of male and female ocellated turkeys do not differ and cannot be used to determine sex. Neither male nor female birds have a beard.

Tail feathers in both sexes are bluish-gray in color with a well defined, eye-shaped, blue-bronze colored spot near the end followed by bright gold tip. The tail feather spots are similar to those seen on peacock feathers which led some scientists to once believe the ocellated was more related to peafowl than turkeys. In fact, these spots helped give the ocellated its name, as the Latin word for eye is oculus.

The upper, major secondary wing coverts, or wing bar, are a rich copper color and highly iridescent. The barring on primary and secondary wing feathers is similar to North American turkeys, but the secondaries contain more white coloration, especially on the outer edges.

Both sexes have a blue-colored head and neck with distinctive orange to red, warty, caruncle-like growths, called nodules, but they are more pronounced on males. The head of the male also has a fleshy blue crown behind the snood which is adorned with yellow-orange nodules similar to those on the neck. During breeding season, this crown enlarges and the coloration of the nodules becomes more pronounced. Ocellated turkeys also have a distinct eye-ring of bright red colored skin, especially visible on adult males during the breeding season. 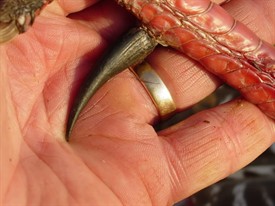 Legs of ocellated turkeys are shorter and thinner than North American wild turkeys and are deep red in color. Legs of adult males also have pronounced spurs; longer and more attenuated than those of North American gobblers. Spur lengths in males over 1 year old average at least 1.5 inches. Spurs longer than two inches have been recorded.

Ocellated turkeys are significantly smaller than any of the five subspecies of North American wild turkeys. Adult hens weigh approximately 8 pounds just prior to egg-laying and nesting and about 6-7 pounds the remainder of the year. During the breeding season adult males weigh approximately 11-12 pounds. 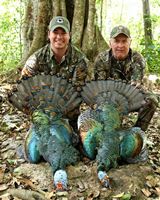 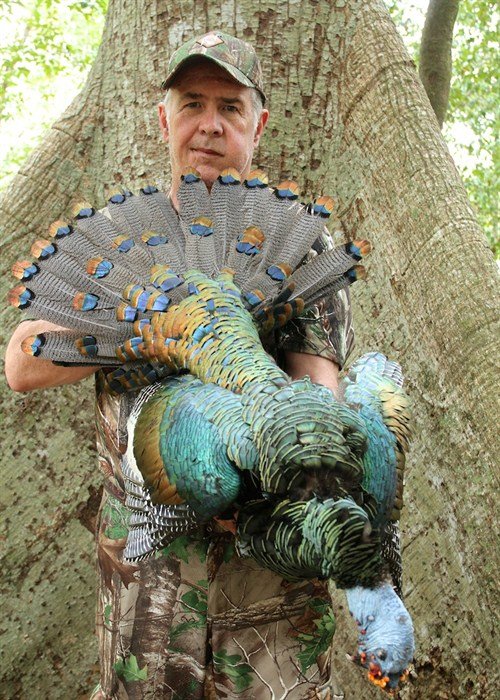 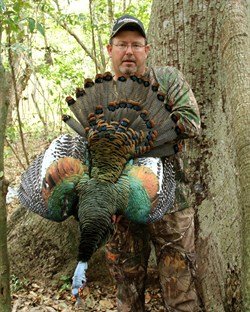 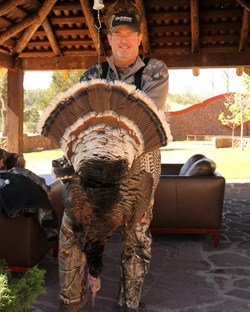 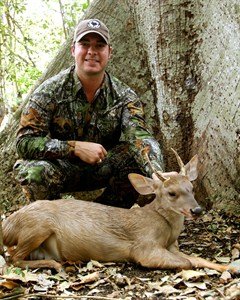 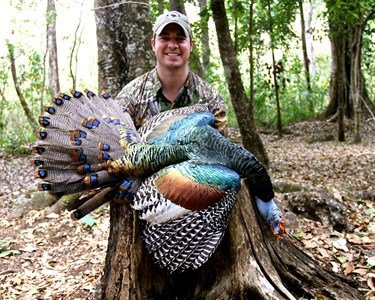 GetDucks.com did what I expected, when I asked. Prompt and to the point, and I like the way I was treated. Thanks for a great ocellated turkey hunt.

Everything about my ocellated turkey hunt was great – the guides, food, lodging, hunting. I was surprised by how comfortable the beds were at our authentic jungle tent camp.  Seeing and hearing lots of ocellated turkeys is an experience I will remember forever, and the 2 ocellated turkeys I collected have exceptionally long spurs. I do not know how they could do much better.  GetDucks.com did what I expected, when I asked. Prompt and to the point, and I like the way I was treated.  Thanks for a great ocellated turkey hunt. 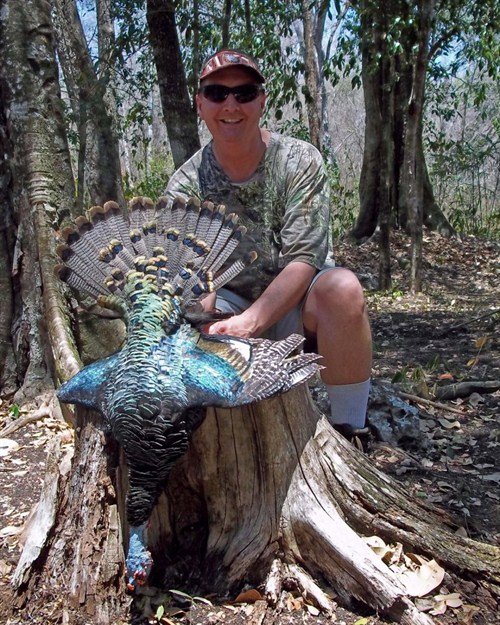 Had a great time during my recent ocellated turkey hunt near Campeche, Mexico.  I got 2 nice ocellated turkey trophies and a Greater Currasow – luckily, in just 3 days.  The guides and trophy bird preparation were excellent.  I was not really expecting the “full jungle experience” of ocellated turkey hunting – there were alot of other wildlife to view and appreciate.  Binoculars and a good bird identification book are must-bring.  Jungle tent camp was comfortable and the food was good.  Left camp earlier than planned and was thankful for the convenient assistance of Cherie and Anita in making airline changes.  Thanks for arranging another great turkey hunting experience. 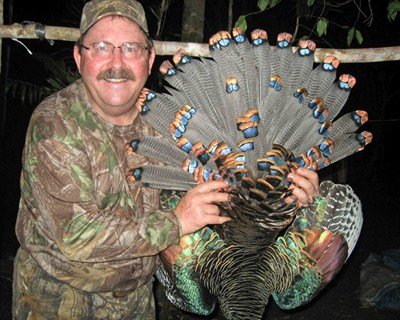 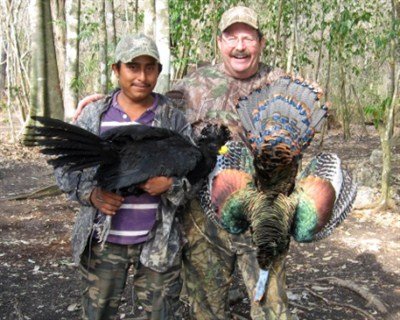