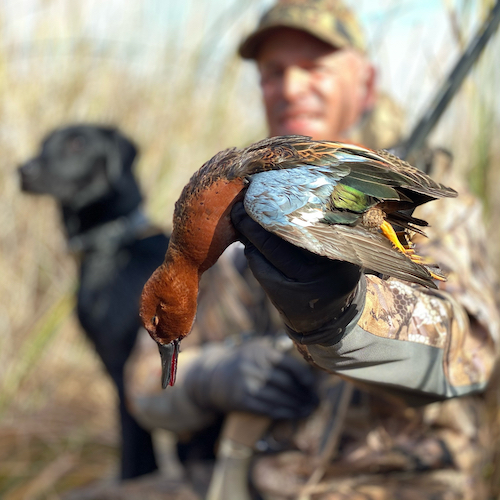 Similarly to blue-winged teal, shovelers and other species within the same genus, Cinnamon Teal (Spatula cyanoptera, formerly Anas cyanoptera) have a light blue wing patches and dark green speculums separated by a white stripe formed by secondary coverts. Legs are yellow, bills graphite-colored.  Drake cinnamon teal molt into their showy, ruddy, dark-paprika colored plumage during their wintering months, covering the head, breast, and underbelly. Drakes also have black coloring running down their back, covering the tail. Nutmeg-colored tertials in contrast to cinnamon colored body plumage is stunning. During the non-breeding season, drakes resemble the hens with a mottled brown coloration, with the wing feathers a deep brown, fringed on the sides with a much lighter brown. Cinnamon teal may then be discerned from blue-winged teal by their wider and longer black bills and the drake’s bright red eyes.

As many as 5 races of cinnamon teal are recognized worldwide. There are two separate regions for breeding, one in North America and one in South America, these two groups will not mix. Breeding populations in North America do not occur at all in the mid-inland states, but rather breed along the western coast of the United States (furthest inland is western Texas) and a little up into Canada. Cinnamon teal like rank marsh, prefering wetland areas with vegetation that can be used for cover as well as for foraging, some of which include. Think mucky-bottoms, cattails, sedges. Requirements for shallow freshwater marsh conditions are preferred year-round. Cinnamon teal migrate overwinter nearly exclusively in western Mexico, with a few holdovers in California, Arizona, New Mexico, and Texas.

Cinnamon teal travel in small family cohorts to feed on vegetation, snails and other invertebrates. With the exception of Peru, rarely are they encountered in sizable flocks as such seen in green-winged and blue-winged teal, especially on wintering grounds.