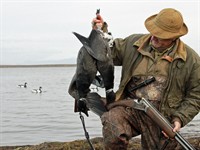 With a desire for late season birds with taxidermy-quality plumage, we selected the last week of October 2011 for our hunt. Our waterfowling itinerary included sea ducks, diving ducks, puddle ducks, Pacific black brant and Canada geese. In addition, we planned to hunt willow ptarmigan…We have hunted many states and countries and agreed that this hunt was among each of our top five favorites.

GetDucks.com 2012 Wingshooting Destinations may be viewed in it’s entirety online or purchased at http://www.blurb.com/books/3893469-getducks-com-wingshooting-2012

IN PURSUIT OF KING EIDER

In a matter of days, Saturday to be exact, I’ll make my way to one of the most inhospitable places on earth to hunt for one of the hardiest, most desired ducks known to waterfowlers – the king eider.
Read: In Pursuit of King Eider

A Top 10 list of locations every waterfowler would give a precious bid to hunt.
Read: The World’s Best Waterfowl Hunting

Goals. We all need them. Short term, long term–and those that fall somewhere in between–keep us focused and give us something to, excuse the pun, shoot for.
Read More: Setting Season Goals

The Migration Nation team heads to the Mississippi Delta for some fast-flying teal hunting action.  Mississippi native, Ramsey Russell of GetDucks.com, joins us for some great shooting, exceptional dog work, and a little piece of delta blues history.

WHERE THE RIVER NARROWS

Trying to convince myself I’d rather be elsewhere was futile. I’d rather be mowing the lawn. No. I’d rather be at the office. Nope. I’d rather be painting the front porch. Not happening. Duck season ended months ago and little league baseball was underway. But even with rivulets of icy rainwater occasionally breaching a cinched collar and winding down my back, there was absolutely nowhere I’d rather have been than hunting snow geese adjacent to the mighty St. Lawrence River in Quebec.
Read Article: Where the River Narrows

SIX SHOOTER IS WHERE THE HEART IS

To anyone raised in rural Mississippi, land valuation is intuitively learned and easily recognized. Land is worth what it is capable of producing. Whether it is bales of cotton, pounds of catfish, bushels of soybeans or corn, board-feet of lumber, or number and quality of deer, ducks, and turkeys – the math is really pretty simple. More is better.

Read Story: Six Shooter Is Where the Home Is (Six Shooter Land and Timber Hunting Club)