Five-star thread counts and white-glove level luxury? Not really- it’s much better than that. Las Flores Argentina duck hunting with GetDucks.com entails huge limits of splashing decoying ducks, some of the coolest wingshooting available in a country that’s full of it.

Terry travels to Peru with Get Ducks.Com to a location reputed to hold the largest concentration of Cinnamon Teal in the world. As good as the duck hunting was, in paled in comparison to the local sites and culture.

Ramsey Russell of GetDucks.com hunts all over the world, but will not leave the southern U.S. during September.  Asked why he loves teal hunting so much he took an uncharacteristic moment of pause to know where to begin. 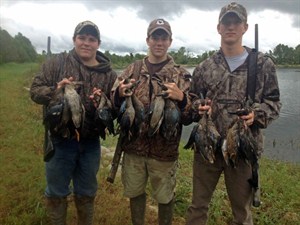 Standing in the dark while the rain pelted them Saturday morning in Satartia, Ramsey Russell and his young hunting party could hear wings and chatter but couldn’t see the birds. When the light finally penetrated the clouds, Russell said, “It was on like Donkey Kong.”

Argentina Red Stag hunting trip of epic proportion: The hypnotic beauty of the biggest-ever brook trout in hand, sunrise over a spewing volcano, the smiles of gaucho children, the foxes running to our calls, the strange ocean fish materializing from the depths, the noisy clouds of ducks and, most of all, the outrageous roar of giant wild red stag in the black timber of the high Andes. What are these things worth?

Peru duck hunting in the Andes is neither about the art of seducing wild ducks to decoys, nor about the thrill of high-volume trigger pulling.  It is about collecting specific trophy waterfowl that can be found nowhere else on earth other than in the Andes Mountains. (Note: Since this story was published, Peru’s hunt calendar has changed to exclude the take of Torrent Duck, Andean Ruddy and Giant Coot). Referenced hunt: Peru duck hunt

For the first time since the season was opened in 1965, early-season teal hunters could see a six-bird limit this year. “The three flyways that have teal seasons put forth a recommendation for a 16-day, six-bird bag limit season,” said Jim Kelley, Mississippi Flyway representative for the U.S. Fish and Wildlife Service.

Ramsey Russell, GetDucks.com, hunts waterfowl around the globe, but said his favorite duck hunting is the early teal season in Mississippi. “I’m excited about it because it’s putting adaptive science management into play to the benefit of sportsmen,” he said.

Team MOJO traveled with Ramsey Russell’s GetDucks.com for some Fast & Furious Argentina Duck Hunting at La Flores.  THIS is the kind of duck shooting for which Argentina and GetDucks.com are world-famous.  These 2 dynamite episodes aired in 2013. Read more about Argentina duck hunting at Las Flores

ALASKA KING EIDER HUNTING IS ALL ABOUT GETTING THERE

Occasionally someone will introduce themselves at our GetDucks.com booth by holding up an index finger and explaining that they have killed every single North America waterfowl species except for ONE.  That’s all that need be said. Alaska king eider hunting – and their trophy of a lifetime – awaits.

Read full story: Alaska King Eider Hunting Is All About Getting There